After a come from behind victory in Game 5, the Boston Bruins head back to Beantown looking to win the series in front of the home crowd. Can the Bruins close out the series on Saturday, or will the Detroit Red Wings force a Game 6?

The Boston Bruins battled back from a 0-2 deficit against the Detroit Red Wings and won in overtime of Game 4 of their series on Thursday night. The President Trophy winners now have an excellent opportunity to close out the series in Game 5 at home, where they are 8-2 in their last 10 home games.

[sc:NHL240 ]This series continues to be dominated by special teams play. In Game 4, the Bruins’ Torey Krug scored on the power play, Boston’s fourth power play goal in the series. Boston leads all 16 teams in the playoffs with a 40% power play clip, converting four of their 10 total opportunities.

After a shutout loss in the series opener, the Bruins have now scored at least three times in each of their last three games, while containing Detroit’s offense. Boston has allowed the fewest goals (4) in the Playoffs with Vezina Trophy candidate Tuukka Rask between the pipes. Rask, who turned away 35 shots in Game 4, has the highest save percentage among goalies with at least four games played in the Playoffs with a .966 save percentage.

Rask will have to be in great form again for Game 5 at home, as Detroit seemed to have their way against him whenever they play at TD Garden. Boston is 2-4 in the last six home games against the Red Wings.

After a disappointing loss in Game 4, in which they saw their 2-0 lead slip away, the Red Wings are now faced with the difficult task of winning three in a row against Boston in order to advance to the next round of the Playoffs.

Coach Mike Babcock certainly knows that the team’s offense must come to life for Detroit to have a puncher’s chance of upsetting the Bruins. The Red Wings, who are obviously feeling the absence of the Daniel Alfredsson in the last two games, have been outscored by Boston 10-4 in the series. 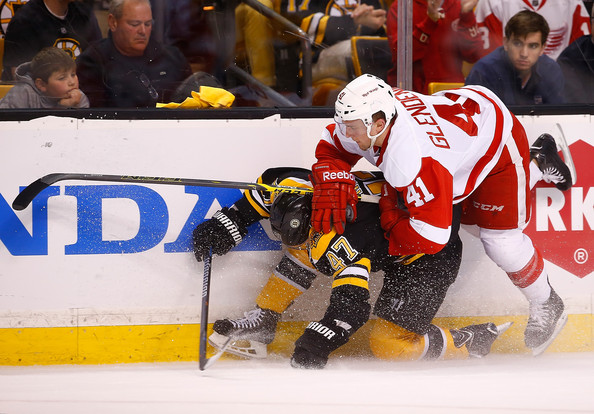 Making matters worse is Gustav Nyquist’s untimely slump. The youngster was expected to be one of Detroit’s weapons in the series but hasn’t scored a goal yet in four games.

Even the surprise return of Henrik Zetterberg to the lineup in Game 4 did not pay off dividends for the Red Wings. Zetterberg missed his only shot on goal in 19:34 of total ice time.

The Red Wings are 4-0-2 under in their last six road games.

The Bruins will send Detroit packing in Game 5 by at least two. The Red Wings are simply too banged up to stand a chance in stopping the seemingly stronger, bigger, and more determined Bruins squad. Take the Beantown favorites on the puckline at -1.5 (+130) to get some value on this dominant team.