Whether your team made the playoffs or not, you don’t want to end your season on a losing note, right? And just because regular season in fantasy football is over, it doesn’t mean you’d totally forget what happens on your league’s waiver wire. Who knows, the player that would provide that extra kick to push you into the finals. Alright, here we go. Below are some of the players experts everywhere are suggesting owners to pick up.

For more football, you can read our complete picks and predictions for all Week 15 games.

[sc:NFL240banner ]Oh yeah, Yahoo’s Andy Behrens wants you to sit down and listen to him talk about starting AJ McCarron. But he’s not in any way shoving the former Alabama quarterback down your throat. He just wants owners of Andy Dalton in particular to at least pay McCarron some attention. With Dalton out for the foreseeable future with a thumb injury, Dalton owners may have to take a hard and long look at McCarron. After all, the Bengals would still surround him with elite talent like Tyler Eifert and A.J. Green. What’s more, McCarron will see San Francisco’s wasteland defense next Sunday. The 49ers are 27th in passing defense thus far this season, which may be bad enough for McCarron to put up decent numbers. Against the Steelers in Week 14, McCarron passed for 280 yards and two touchdowns with two picks on 22 of 32 completions.

Guess how many touches Tim Hightower got in Week 14? Nope, it’s not 20. It’s way more than that, as the four-year back received 28 touches in the backfield and added one reception. This wouldn’t have been possible if it weren’t for the season-ending injury to Mark Ingram. He’ll be the same high-volume running back moving forward with Ingram out for the year. It may not be too late to add Hightower to your roster, as he’s only owned in 41 percent of ESPN leagues. Take a pause in reading this article and go grab him while he’s still available.

Josh Clark of CBS also doesn’t want deep-league owners to sleep on DuJuan Harris of the Seahawks. Baby Beastmode Thomas Rawls was declared out for the season following a nasty ankle injury he picked up against Baltimore in Week 14, thus putting Harris in the limelight. You don’t want to benefit off someone’s injury, but Rawls being hurt should prompt owners to scour the waiver wire for Harris. Harris rushed for just 42 yards on 18 carries opposite the Ravens, but he might do better this Sunday against Cleveland’s defense that ranks 29th in the league against the rush.

Lastly, there’s Denard Robinson, who’s bound to get the lion ‘share of touches in the Jags’ backfield. T.J. Yeldon could be out with a sprained knee, while Toby Gerhart was placed on the injured reserve list, making Robinson one of the top adds this week. 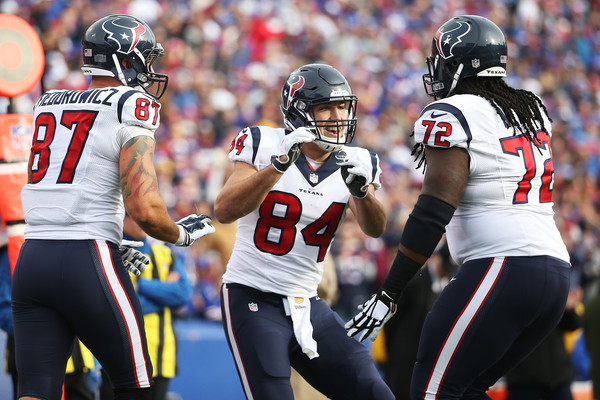 In need of a tight end in your (deep) league? There’s a big chance that Houston’ Ryan Griffin is still lying around on your league’s waiver wire. He’s owned in just 3.2% and 2.0% in ESPN and Yahoo leagues, respectively. While Griffin’s one-catch 20-yard performance in the loss to New England in Week 14 is a big turn off for most people, it’s still worth noting that he’s been getting significant number of looks in the Texans’ passing game. He’s been targeted at least five teams over the past three games, and could be in line for more next Sunday against the Colts’ defense that has allowed the 13th most points to tight ends thus far this season.