The New York Rangers drew first blood in the first meeting, using its defense to stop the Philadelphia Flyers on their tracks. Will Game 2 feature more of the same, or will the Flyers muster enough on offense to finally succeed against Henrik Lundqvist and company?

[sc:NHL240 ]In game 1 of series on Thursday night, the Philadelphia Flyers kept in step with the New York Rangers for two periods, and then the wheels fell off in the third, as they surrendered three goals to the Rangers to take a 4-1 loss in the opening game of the series. The game paid nicely for Rangers bettors. If you’re interested in getting in on the NHL betting action, create an account and we’ll throw in a 50% deposit bonus up to $250.

Coming into the game, the Flyers had scored at least two goals a game in their last six, only to be held to one in this one.

To bounce back in the second game, the Flyers must solve the Rangers’ defense. The trio of Claude Giroux, Wayne Simmonds, and Jakub Voracek were completely silent, combining for an unacceptable two shots on goal, all of which were by Simmonds.

With Steve Mason apparently out for Game 2 as well, the Flyers’ defensemen need to ease the load a bit off Ray Emery, who faced 36 shots in Game 1. Emery had a valiant effort until the Rangers poured it on in the third. Flyers games have gone over in two of the last three games when Emery is in net.

It would help the team, too, if Philadelphia limits its penalty minutes. The Rangers scored two power play goals in Game 1.

Henrik Lundqvist continued his domination of the Flyers Thursday as the New York Rangers pushed its home winning streak versus the Flyers when The King is in goal to nine games in Game 1. 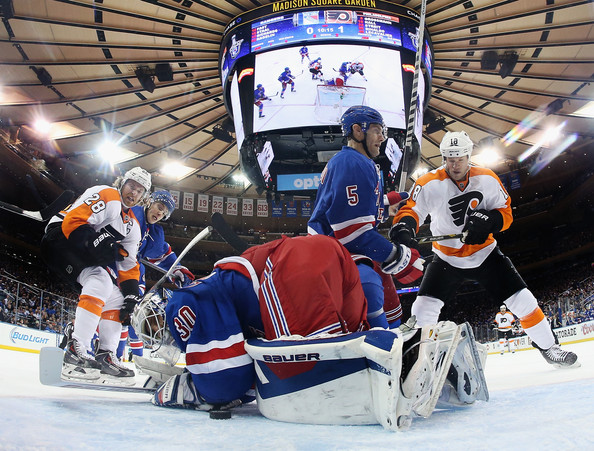 The Rangers are now 5-1 in their last six games at Madison Square Garden.

With the Rangers’ blue line keeping the high-scoring Flyers in check, Lundqvist faced the fewest shots against (15) he’s seen since the season began. New York had 10 takeaways in the game.

New York took full advantage of a power play opportunity that came in the third period to break away from the Flyers as Brad Richards and Derek Stepan netted a goal to give their team a 3-1 lead. Carl Hagelin shut the door completely on the Flyers by scoring another with barely four minutes left in regulation.

A major storyline for the Rangers in this series and playoffs in general is the play of Brad Richards. After an awful season last year that featured him in the press box as a healthy scratch in the 2013 playoffs, the Rangers have given Richards a second chance this season. And on Thursday, Richards responded: suddenly rejuvenating his former play and putting up three points in the third period and helping seal the game.

If Richards can maintain even a glimmer of that left of play as the series rolls on, the 2004 playoff MVP could be the difference against the Flyers.

The power play was costly for the Flyers, which was the big reason why the game went over the total. Expect the Flyers defense to tighten a bit in Game 2. Emery will still give it his best shot while Mason is out and Lundqvist will still be Lundqvist. Take the under and enjoy the game.