Four years since their first meeting, Carlos Condit and Martin Kampmann will once again cross paths. They will meet this time in the main event of the Ultimate Fighting Championship Fight Night 27 at the Bankers Life Fieldhouse in Indianapolis on August 28.

Both fighters lost to current welterweight top contender Johny Hendricks in each of their last fights. Condit suffered a unanimous decision while Kampmann got rocked by a left hand in the first round for a knockout loss. A victory in this upcoming match-up will bring the winner a step closer back to relevancy in the welterweight division.

The co-main event has a pair of lightweight spitfires Donald Cerrone and Rafael dos Anjos, both on a mission to beat the hell out of the other. Other fights on the undercard feature a stream of familiar Ultimate Fighter tough guys and up-and-comers. 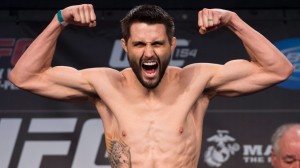 When Condit lost to Kampmann in their first fight in 2009, he quickly got back on his feet and impressively strung together five straight wins against strong opponents like Dong Hyun Kim, Dan Hardy, and Nick Diaz.  His win against Diaz made him the UFC’s interim welterweight champion and earned him a ticket to face reigning champion Georges St-Pierre—to whom Condit eventually lost.

Condit suffered his pro-career’s first back-to-back losses when he lost his following assignment against Johny Hendricks. Coming into that fight, Hendricks was a slight favorite being priced at -150 while Condit, +110. A bout against a familiar foe like Kampmann may be what the man they call “The Natural Born Killer” needs in order to rejuvenate his career. 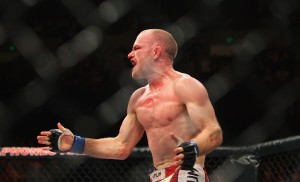 Though much has happened since their first meeting, Kampmann can still make use of one clear advantage he has over Condit. The Dutch fighter, having beaten Condit before, holds a psychological advantage in their upcoming match. Kampmann has also managed some fear-inducing wins recently over the likes of Rick Story, Thiago Alves, and Jake Ellenberger.

In his last fight, Johny Hendricks made him see stars after getting knocked out in the first round. It was a taste of his own medicine as Kampmann is known to possess fearsome knockout, and an underrated ground game.

Kampmann enters the fight against Condit with a record of 20-6. Bet on Martin Kampmann at Top Bet sportsbook once odds are released.