Can you believe it? We’re just days away from the start of the 2016 Rio Olympics and anticipation is building into a fever pitch for this great sporting spectacle. Team USA arrives at this event as the odds-on favorite, having won the gold medal in the last three Olympics as well as capturing the recent Women’s World Cup.

Can the Stars and Stripes continue their winning run and make it four in a row here in Brazil? Or will another nation spoil their party? Read on below for an in-depth breakdown of this Olympic event and while you’re at it, you can check out our preview of the Men’s soccer competition.

It isn’t a complete surprise to see Team USA installed as favorites to win this Olympic event. The Americans have won this tournament four out of the five times it has been played in the Olympics, including each of the last three editions. The Stars and Stripes outlined their dominance in the women’s game last year when they captured the World Cup for the third time in their illustrious history. The Yanks continued their winning run at the SheBelieves Cup earlier this year where they defeated powerhouse teams such as France, England and Germany.   No wonder head coach Jill Ellis is feeling confident of her wards’ chances this coming August.

That being said, the Americans will have their work cut for them in the Rio Games as they will be lining up without some of their key stars. Abby Wambach, Shannon Boxx and Lauren Holiday have all retired since last year’s World Cup while Megan Rapinoe is a major doubt for the 2016 Olympics because of a knee injury. The onus then is on Alex Morgan to carry the offensive load for Team USA. The 27-year-old has scored 67 goals in 110 international appearances for the three-time defending champions.

If there’s one team that can stop Team USA in the Rio Games, it’s got to be powerhouse Germany. They have already proved their mettle in these big tournaments, winning the Women’s World Cup twice and the European Championship a record eight times. That being said, the Olympic gold medal is the only major international title Germany has not won. The Germans will look to make amends in this competition after failing to qualify for the 2012 London Olympics, the first time they have missed out on this quadrennial event. 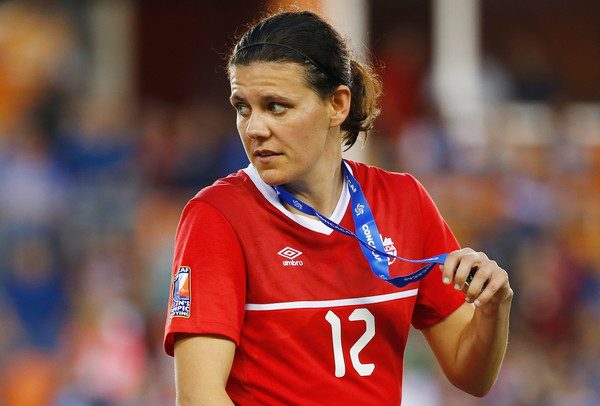 After claiming bronze in the 2012 Olympics, don’t be the least bit surprised if the Canadians win another medal in 2016. Six players from that winning squad will be returning for Rio 2016 namely: Rhian Wilkinson, Diane Matheson, Desiree Scott, Sophie Schmidt, Christine Sinclair and Melissa Tancredi. The one to watch out from that group is the incredible Sinclair. She scored a stunning hat-trick in Canada’s gut-wrenching 4-3 semifinal loss to the United States in the 2012 Olympics. She led the entire women’s soccer tournament with six goals in that London Games.The Burnaby native has scored a whopping 162 goals in 230 international appearances for Canada.

China will head to the Rio Olympics with momentum on their side after a dominant showing in the Asian qualifiers. China eliminated Japan in the race for the Olympics after beating South Korea, 1-0, in their final group game. China’s qualification was quite a shock considering they ousted a Japan side that won the 2011 World Cup and finished runner-up at the 2012 Summer Games. Expected to lead the way for the Chinese in this Olympic Games is forward Ma Xiaoxu. The 28-year-old has been a regular fixture in the national team for 11 years now and has amassed a total of 61 goals in 149 appearances.

If there’s one team in this competition who knows how to play spoiler, it’s got to be Zimbabwe. The Zimbabweans bucked the odds in the African Olympic qualifiers, upsetting highly-fancied Cameroon in their two-leg match. Rudo Neshamba scored the winning goal in the second leg of that critical tie to send Zimbabwe to their first ever global soccer tournament. They will have their work cut out for them, however, in the Rio Olympics as they are grouped alongside 2012 bronze medalists Canada, two-time world champions Germany and the ever-improving Australia.

Create a betting account now and don’t miss this golden opportunity to get in on all the red-hot 2016 Rio Olympics action.