Who’s ready for the brand new season of college football? The first week of NCAAF action is loaded with salivating matchups featuring top 25 teams, major conferences title contenders, and a bunch of well-known programs all vying to get that sweet W no. 1 to start of their respective campaigns. With that said, let’s take a look at five of the best matchups for Week 1.

NCAAF Week One Predictions and Preview

Ranked No. 1 in the AP preseason poll, the Crimson Tide will come into this game brimming with confidence. After all, they’re the nation’s defending champions. Unlike last season though, Alabama might have to rely more on its passing game with Derrick Henry and Kenyan Drake now in the NFL. In any case, this is Alabama with a legendary head coach in Nick Saban at the helm so expect the Crimson Tide to be more than ready for this matchup, as they’ll  mostly be running the ball and playing terrific defense. USC is underdogs by 10.5 points, but don’t completely discount the chance of the Trojans scoring an upset let alone covering the spread. Their back seven is deep enough to stifle Alabama’s passing game, which could force the Crimson Tide to rely more on their less reliable backfield for offense.

LSU and Wisconsin lock horns at Lambeau Field right in the very first week of college football and that should get you really excited. For LSU, the Tigers will once again parade Leonard Fournette, a man-child of a running back capable of running through large human beings for a touchdown score. He’ll be the center of LSU’s offense that is also hoping to be more depended of its passing game. Wisconsin also has an elite running back of its own in Corey Clement though LSU figures to be do a better job in containing Wisconsin’s run game, considering the Tigers’ much solid defensive line in comparison to that of the Badgers’ defensive line. 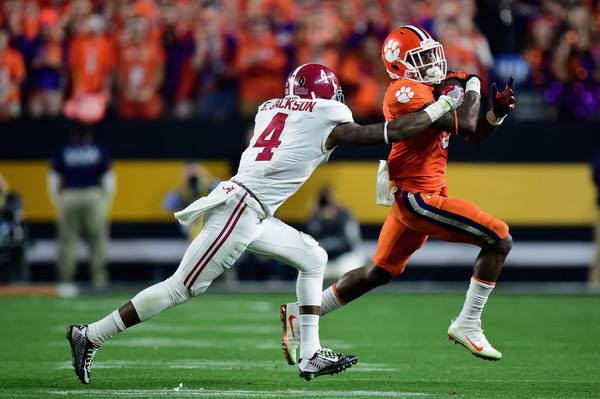 Deshaun Watson and crew want no less than an emphatic victory to open Clemson’s 2016-17 campaign following a runner-up finish last season. And the ACC Tigers will have the almost the same set of offensive pieces, led by potential Heisman Trophy winner Watson, to barrel through Auburn’s defense. Apart from Watson, Clemson also returns running back Gallman, who finished last season with 1,527 rushing yards and 13 touchdowns. Auburn’s defensive line appears to be solid, but beyond that unit, Auburn’s back seven might have trouble containing Clemson’s attacks.

Auburn, however, is playing at home, where the crowd could be a notable factor. Still, Auburn will have to prove that it has the offense to keep in step with the high-powered attack of Clemson and the defense to stave it off. That’s unlikely to happen with Clemson having the decided advantage on both sides of the field.

For the second year in a row, Notre Dame and Texas will meet in both team’s season openers. Last season, Notre Dame handed Texas a severe 38-3 beating. That was in South Bend, though. This time, the Longhorns will be the ones holding court in Austin.

Notre Dame’s offense lost a few pieces over the summer including wide receiver Will Fuller and offensive tackle Ronnie Stanley but those left behind on the unit are staring at Texas’ defense that allowed 452.6 total yards per game in 2016. Texas, however, added a number of top-flight prospects shore up its defense. The offense will break in a new quarterback in freshman Shane Buechele. Buechele ‘s drawing praises from head coach  Charlie Strong, but he’ll be in a pressure cooker right away facing a legendary football program in front of a massive Texas crowd.

Oh boy, the Seminoles have the makeup of a terrifying offense. Seven offensive line starters return to protect FSU’s quarterbacks and open up running gaps for Dalvin Cook and the backfield. Speaking of Cook, the running back is as explosive as they come and he’ll be a marked man by Ole Miss’ defense. Having a target on Cook’s back is different from actually stopping him.

Cook was a bad boy in 2015, racking up 1,691 rushing yards and 20 rushing TDs. Cook is also surrounded by other talented skill players who should open up opportunities for him. That’s what the Rebels and their defense that lost five starters have to deal with on September 5. Ole Miss has the offense to give Florida State troubles, though, with quarterback Chad Kelly back in the mix. Ole Miss was eighth last season in scoring with 40.8 PPG.

Create a betting account now and win big on the NCAA football season.