Best Games to Bet on Today: Raptors vs Pacers & Bruins vs Ducks

The Toronto Raptors took down the East-leading Indiana Pacers on New Year’s Day, but can they do it again, this time on the Pacers’ tough home court? And in the NHL, the Bruins look to accomplish what no one else has this season: win in regulation on Anaheim’s home ice.

Toronto may have had its season-high five-game winning streak ended by the Miami Heat on Sunday, but the Raptors still pushed the champions hard. [sc:Other240banner ]

The Raps were up by five through three quarters before fading in the fourth. Although they lost 102-97, Toronto still covered the 6-point spread, making them 6-0 ATS in their last 6 games. One of their victims during that streak: an upset against the Pacers on New Year’s Day.

Indiana will have that defeat fresh in mind. The Pacers are 7-1 SU in their last eight games, with the lone loss coming at Toronto. But the Raptors will now pay a visit to the best homecourt in the NBA. The Pacers are 16-1 SU at home this season. The Toronto game aside, Indiana’s league best defense is giving up just under 82 points per game in its seven previous wins. 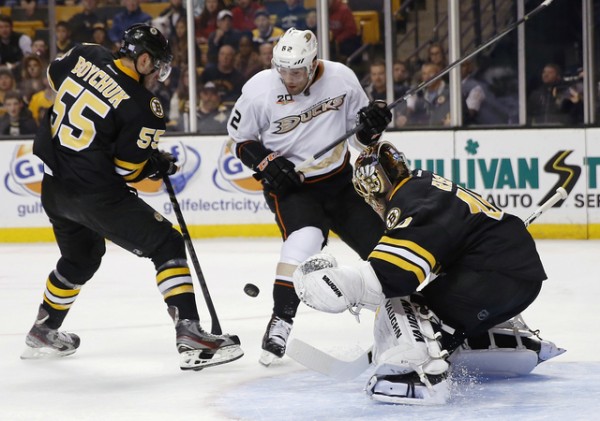 Despite dropping back-to-back games right before the New Year, the Boston Bruins are still the second-placed team in a watered down Eastern Conference. They’ve bounced back by winning their first two games in 2014. Tuukka Rask allowed 8 goals in those two defeats, but the Boston netminder is still well within the top five in goals allowed with a 1.96 GAA. The OVER is 5-0 in Boston’s last five road games.

The B’s will have their hands full with the hottest team in the NHL, the Anaheim Ducks. The Ducks are 13-1 SU in their last 14 games to pull into a tie with the Chicago Blackhawks for the best record in the NHL. A major factor in Anaheim’s success has been its immaculate home record; the Ducks are an NHL-best 17-0-2 on home ice.

For the most comprehensive list of NFL, NCAAF, MLB, and NHL game odds and betting lines, visit Top Bet’s sportsbook.