The Tampa Bay Lightning successfully repulsed the Detroit Red Wings in the first game of their Stanley Cup Playoffs series. Nikita Kucherov and company will now look to go up 2-0 before the series shifts to Hockeytown. Read on for more about this game. You can also check out our preview of Blackhawks vs. Blues.

The Red Wings didn’t have a good start to their playoff campaign, losing to Tampa Bay 3-2 Wednesday night. Detroit led in the second period, 2-1, but didn’t score the rest of the way.

Despite the loss, the Red Wings have a couple of positive takeaways from that game heading into Friday’s contest. Goalie Jimmy Howard played decent, making 31 saves and helping Detroit shut down the Bolts’ power play. Tampa Bay was 0-for-4 on the power play in the series opener.

Mike Green also had a solid performance, as he scored Detroit’s second goal that put the team ahead momentarily. Green is turning it up again in the playoffs. The goal was the defenseman’s 10th goal in 72 postseason games.

Detroit won the possession battle, outshooting Tampa Bay 36-34, while also giving the puck away just four times compared to the Bolts’ 10. Detroit has no reason to panic yet. The Red Wings, however, should find a way to involve rookie Dylan Larkin in the offense after getting just two shots in Game 1. Speaking of activity, the Red Wings must be encouraged by the effort of Pavel Datsyuk. The Magic Man didn’t score but managed to slice through Tampa Bay’s defense for seven shots on goal. 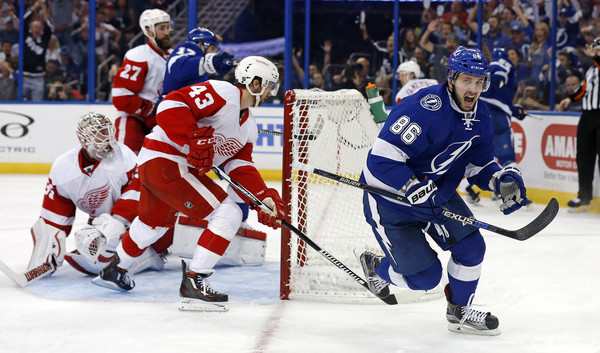 The Lightning struck first versus Detroit despite missing some key members in Steven Stamkos and Anton Stralman. More than a nice confidence booster, the win was also a testament as to how potent Tampa Bay’s injury-riddled team still is.

The first line was just too much for Detroit in Game 1 with Nikita Kucherov scoring twice and Alex Killorn netting the game winner. The trio is expected to carry much of Tampa Bay’s offense moving forward especially against Detroit’s porous blue line that allowed 29.7 shots per game in the regular season. Kucherov scored three goals and had two assists in four regular season meetings with the Red Wings.

The presence of Victor Hedman in Game 1 was a big plus for Tampa Bay, which missed the defenseman in the previous three contests. Hedman had a goal reversed but the sight of him on the ice and doing Victor Hedman stuff in the first game of the playoffs provides hope for Tampa Bay’s blue line that is already missing Stralman.

Ben Bishop played tremendous in front of the net despite the unusual high amount of shots on goal he faced. He turned away 34 of Detroit’s 36 shots.