The long wait is over for the Miami Heat as they finally knew who their second round opponent is after the Brooklyn Nets outlasted the Toronto Raptors. Can Miami continue its unbeaten postseason streak, or will Brooklyn handle the Heat once again? Tell us if anyone can dethrone the Heat in our survey here.

Our review of experts’ predictions for the NBA playoffs highlighted how all of the foremost sports journalists in America tapped the Heat to make it this far, but not all expected Jason Kidd’s Nets to make the second round. You can predict a winner of your own if you create a betting account today and claim an instant 50% deposit bonus.

[sc:NBA240banner ]As expected, the Miami Heat coasted through their first round series assignment, sending the Charlotte Bobcats out of the Playoffs in four games.

In the next round, the Heat will face a more daunting opponent in the Brooklyn Nets, a team that has arguably given the defending champions the most trouble in the regular season. The Heat lost all four regular season match ups between the teams this year, but all were one-point games. The Heat are still heavily favored in this round, at -550.

Of paramount importance for the Heat is finding a way to clamp down on Joe Johnson and Paul Pierce. The duo averaged 19.5 PPG and 21.3 PPG, respectively, in the two teams’ four meetings this season.

Another key point for the Heat in the series is rebounding. Already beaten by the Bobcats in the rebounding department in the first round (159 to 147), Miami’s big men could be in for another stiff battle beneath the boards as the Nets had outrebounded them in their regular season matchup, 40.3 RPG to 34 RPG.

The Heat are 3-1 ATS in last four games. 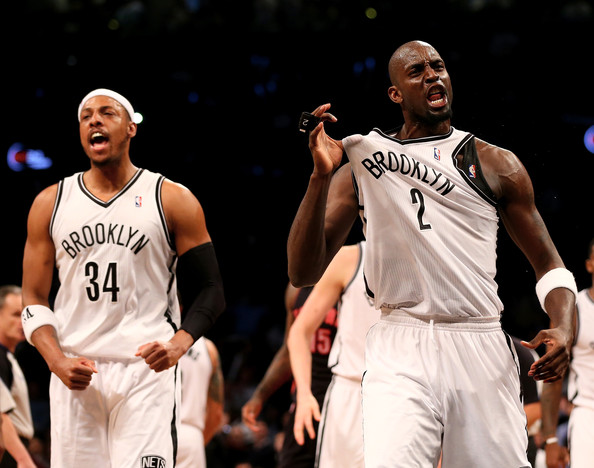 The Nets four wins over the Heat were big this season. They plan to add four more in the playoffs, but it is a tall order to be sure. The Nets are priced at a valuable +425 to make it to win the series and make it to the Conference Finals.

Unlike Miami, the Nets needed to pass through the eye of the needle to reach the second round of the Playoffs. They took the full route in the first round, beating the pesky Toronto Raptors in seven nerve-wracking games.

The Nets survived the first round series with Deron Williams playing inconsistent basketball, and they’ll need more from its starting point guard against the defending champions. In three losses to the Raptors, Williams averaged only 12 PPG, while he put up 20.5 PPG in wins.

With Pierce and Johnson certainly the top priorities of the Heat’s defense, the Nets’ supporting pieces should step up to lessen the pressure on the two shooters.

Kevin Garnett found another level in Game 7 of the series against Toronto, as the grizzled veteran came up with his best performance in the playoffs thus far, tallying his first postseason double-double with 12 points and 11 rebounds.

A well-rested Miami team will strike first in the series, beating the Nets in convincing fashion. Take the Heat to cover the –7, too.