Novak Djokovic has been tearing away at his competition in the 2015 Wimbledon Championships. He’ll have his first big test in the fourth round of the tournament when he faces the powerful Kevin Anderson. Can Djokovic continue his run of dominance? Or will Anderson serve him one big ace after another in an enormous upset? Read on for a breakdown of this explosive match.

Don’t miss out on all the tennis action. Check out the complete previews for the Stan Wawrinka vs. David Goffin and Roger Federer vs. Roberto Bautista Agut matches.

Novak Djokovic is in a very tough bracket in the early stages of Wimbledon. But he hasn’t lost a beat yet, defeating Philipp Kolschreiber, Jarkko Nieminen and Bernard Tomic all in straight sets. Now he faces another tough challenge in the powerful Kevin Anderson in the fourth round of the tournament.

[sc:Other240banner ]There was very little fuss in Djokovic’s third round victory over Tomic. He needed just about an hour and a half in a 6-3, 6-3, 6-3 victory. Djokovic won 81 percent of his first serve points and struck 15 aces. He wasn’t too shabby on the return either, winning 41 percent of receiving points.

The world No. 1 will need another well-rounded performance against Kevin Anderson if he wants to get to the quarterfinal round. Djokovic has played the South African well in their head-to-head series. He’s won 74 percent of first serve points and 41 percent of receiving points in going 4-1 against Anderson in his career.

Think there’s no way Djokovic loses this match? Create a betting account now and back the world No. 1. 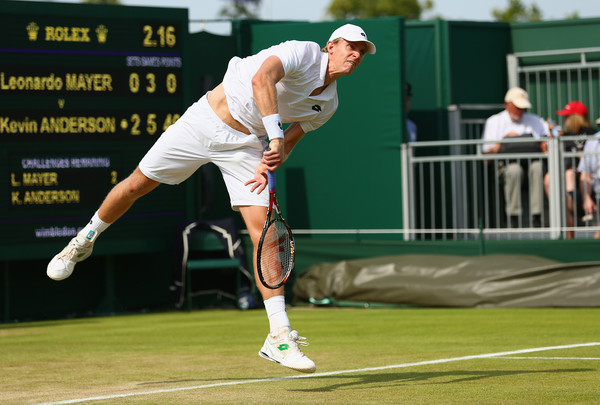 Kevin Anderson “always had a very good serve” said world No. 1 Djokovic. It’s Anderson’s serve that gives him a chance for a big upset in the fourth round of the 2015 Wimbledon Championships.

Anderson was especially on point in his victory over Leonardo Mayer in the third round of the tournament. He struck 51 winners, including 22 aces in taking the match 6-4, 7-6(6), 6-3. Anderson won 87 percent of his first serve points in his most dominant outing in the whole tournament.

Dealing with the South African’s power will be very difficult, even for the world No. 1. Anderson has the most aces (79) among the remaining 16 players in the tournament thus far. But he’s been stifled by Djokovic’s receiving game in their head-to-head matchups. Anderson has won just 66 percent of his first serve points and fired off 32 aces in five career meetings against Djokovic.

Anderson has won seven of his last eight matches on grass.