The Oakland Raiders are in for a rough ride in their next stretch of games, as they take on three-consecutive playoff contenders, starting with a stop at CenturyLink Field against the Seattle Seahawks next week. Can the Raiders cause a major upset? Or will the Seahawks finally show their Super Bowl-winning quality after some hiccups the past few weeks?

Quarterback Derek Carr showed poise and prowess finishing with a game-high 328 yards and a touchdown in a 23-13 loss to the Cleveland Browns last week. The rookie QB had his fair share of mistakes as he fumbled twice, one recovered by Cleveland. The Oakland Raiders have now lost 13 straight games dating to last season.

If there’s a time to strike the Seahawks’ secondary, it would be now, as Seattle have allowed a 68 percent completion rate against opposing quarterbacks in the past three weeks. Carr completed 62.9 percent of his passes Sunday.

However, Oakland may be forced to become one dimensional in this match. The Seahawks rank sixth in the NFL in stopping the run. They allow just 3.3 yards per carry to opposing running backs, which should be concerning for the Raiders. Leading running back Darren McFadden is averaging 3.8 yards per rush attempt this season.

While the Raiders may struggle to establish their own running game, they could also have difficulty containing Seattle’s rushing attack. The Raiders are allowing 131.4 rushing yards per game this season. They’ll need a couple of things to fall their way if they are to limit Seattle’s dual threat quarterback Russell Wilson, who has two 100-yard rushing performances this season.

The total has gone under in Oakland’s three road games this season. 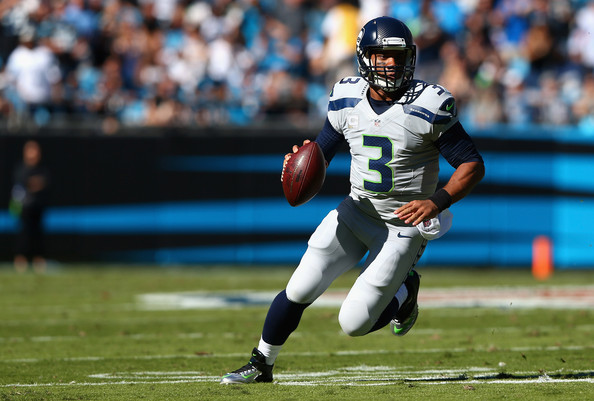 The Seattle Seahawks have been disappointing for spread bettors for the past three weeks going 0-3 ATS over that span. A return to CenturyLink Field may give the Seahawks a reprieve as they are 3-1 SU/ATS in their last four games playing at home dating back to last season.

Quarterback Russell Wilson will look to continue his lights out play in the past two weeks. He has passed for 512 total yards and three touchdowns while rushing for 141 yards and a score on 13 carries in those two games.

Meanwhile, wide receiver Doug Baldwin has stepped up with Percy Harvin now traded to the Jets. Baldwin caught seven passes for a season-high 123 yards and a score in a loss against St. Louis on October 19. He led the team again in receiving yards with 61 against Carolina on Sunday.

Together, Wilson and Baldwin should test Oakland’s secondary which has allowed 272 passing yards per game in the past three weeks.

On the ground, Marshawn Lynch has gone three consecutive games without a touchdown, while failing to reach 90 rushing yards since their Week 1 blowout against the Green Bay Packers. Still, Lynch may be due for a big game against the Raiders’ run defense which allows four yards per carry.

On the other side of the ball, star cornerback Richard Sherman is yet to record an interception this season. As a whole, the Seahawks are tied for the second-fewest picks this season after leading with 28 last year. However, you can’t sleep on Sherman in this game, especially when he’s up against a rookie quarterback that can be prone to errant throws.

The Seahawks take the win at home but the Raiders cover +15. Create a betting account now and cash in on the best football games coming your way.