Roger Federer’s quest for a record eighth Wimbledon title remains right on track after defeating Damir Dzumhur in the first round on Tuesday. The 17-time Grand Slam champion will look to book a place in the round of 32 when he takes on American Sam Querrey in an intriguing clash this coming Thursday.

Read on below for an in-depth breakdown of this round-of-64 matchup and while you’re at it, you can check out our second round previews of Berdych vs. Mahut and Murray vs. Haase.

Where: All England Lawn Tennis and Croquet Club, Wimbledon

Roger Federer eased into the second round at Wimbledon with a comprehensive 6-1 6-3 6-3 victory against Bosnian Damir Dzumhur on Tuesday. It was a resounding performance from the Swiss maestro who needed just 68 minutes to record the straight-sets win.

[sc:Other240banner ]Federer, who improved to 2-0 against Dzumhur, blasted 26 winners and won 64% of his first serve points. What proved to be the difference in the match, however, was Federer’s sizzling return. Federer won 49% of his receiving points against the Bosnian with the World No. 2 converting five of his 10 break point chances.

Next up for Federer is a second-round clash with Sam Querrey. The 33-year-old will fancy his chances against the American as he has won all of his two previous meetings against Querrey. Their last match, though, happened a full seven years ago with Federer beating Querrey in the first round of the 2008 French Open. Federer won in straight sets in that clash, 6-4, 6-4, 6-3.

For Federer to extend his dominance against Querrey, he needs to bring his aggressive style and continue his strong net play. He won 22 of his 33 net points (66%) against Dzumhur in the previous round.

Create a betting account now and put your Wimbledon predictions to the test! 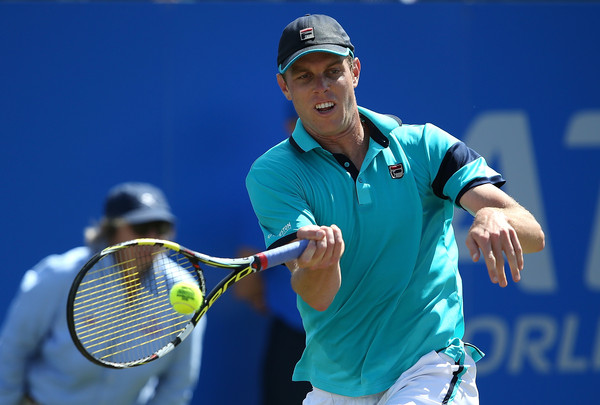 Sam Querrey barged into the second round of Wimbledon with an impressive 7-5, 6-3, 6-4 victory over Igor Sijsling on Tuesday. It was a fantastic showing from Querrey who needed just one and hour and 20 minutes to complete the straight-sets triumph. With the win, Querrey advanced to the round of 64 at Wimbledon for the second year running.

Things are bound to get tougher, though, for Querrey as standing in his way in the next round is Wimbledon great Roger Federer. Querrey is 0-2 lifetime against Federer. In those two meetings, the American has not won a single set.