Two AFC West teams out of the running for a playoff spot meet this Thursday in Oakland, as the Oakland Raiders and the San Diego Chargers play the second and last game of their regular season series. The Chargers are coming off a morale-boosting win in their last home game of the year, while the Raiders continued their inconsistent end to the season with a home loss to the Packers.

Read on for more about this game below. You can also check our Week 16 preview of Packers vs. Cards here.

Betting on the San Diego Chargers (4-10)

[sc:NFL240banner ]Well at least the Chargers treated their fans to an emphatic win in what could be the team’s last game in San Diego. After losing back-to-back games to Denver and Kansas City, the Chargers brought out the big guns on Sunday, defeating Miami 30-14.

The Chargers aren’t going to the playoffs, but they flashed shades of a postseason-ready offense in the win over Miami. Philip Rivers passed for 311 yards and three touchdowns, albeit with a couple of picks, on 26 of 36 completions. Dual-threat Danny Woodhead caught all of Rivers’ three TD bombs, adding 10 rushing yards and a touchdown on eight carries.

Rivers and Woodhead are poised to have those types of outings in Oakland this Thursday, as the Raiders are just 29th in the league in passing defense with 271.5 yards allowed per game. In a 37-29 loss to Oakland in the first meeting back in Week 7, Rivers threw for 336 yards and three touchdowns with two interceptions, while Woodhead took two to the house on 75 rushing yards.

But if the Chargers are going to show up with the same defense that let Derek Carr and company compile 412 total yards, they may put whatever offensive brilliance they’ll possibly have on Thursday to waste.

San Diego needs to apply more pressure this time around on Carr, who wasn’t intercepted and was sacked just once in the first meeting. The Chargers showed some teeth on defense in the Miami game, holding Ryan Tannehill to a zero-touchdown night and the Dolphins’ backfield to only 44 rushing yards.

Betting on the Oakland Raiders (6-8) 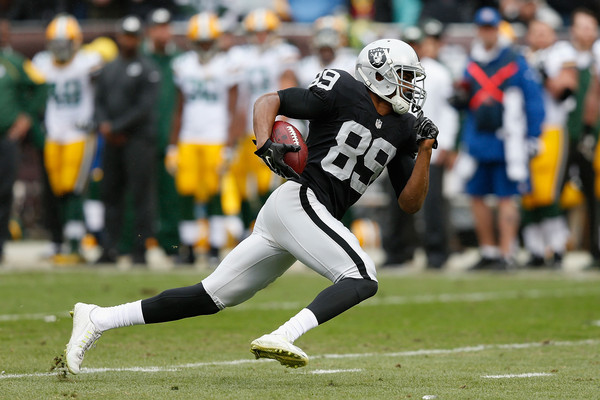 Playing at home wasn’t that sweet for the Raiders on Sunday, as they lost to Green Bay, 30-20. With the loss, the Raiders worsened their home record to 2-5, and they’ll try to improve that when they host San Diego this Thursday.

Derek Carr had a rough day at the office, as he finished with a season-low 63.8 quarterback rating, passing for only 276 yards with two touchdowns and two interceptions on 23 of 47 throws. Carr might have also thought of taking back some of the 55-inch TVs he doled out to every Raiders’ offensive linemen, as he was sacked four times by the Packers.

The Raiders’ O-line has been sturdy for most of the season, but is showing cracks of late, allowing 10 sacks over the past three games. San Diego’s pass rush isn’t that imposing, as the Chargers are just 27th in the NFL in sacks, but the Raiders can’t take that for granted in order to maximize their passing game. Oakland is averaging 253.5 passing yards per game.

Oakland is 3-0 ATS in its last three games against the Chargers.