There are a bunch of great and storied rivalries in the world of collegiate sports – Alabama-Auburn and Michigan-Ohio State immediately come to mind – but none have the same ratio of animosity-to-proximity quite like the crosstown rivalry between the two schools separated by just 11 miles in Los Angeles – UCLA and USC.

Their football rivalry, which began all the way back in 1929, has played out on the field every year, uninterrupted, since 1936 as the two schools have battled it out for the precious Victory Bell. But what exactly is the story behind this sacred trophy and what is its place in this historic rivalry?

Let’s take a trip back in time to investigate the history of the Victory Bell, which is once again on the line in 2014 in the game you can read more about in our USC vs. UCLA preview.

The History of the Victory Bell in the USC-UCLA Rivalry

[sc:NCAA240banner ]The concept of the so-called “Victory Bell” is quite a common one in college football. There’s the Blue Key Victory Bell that’s contested in the rivalry between Ball State and Indiana State. There are also Victory Bells in the Miami-Cincinnati rivalry, as well as North Carolina-Duke, to name just a few.

But just about the oldest and most famous Victory Bell is the 295-pound piece of brass that used to belong to a Southern Pacific Railroad engine and was presented to UCLA by its Alumni Association way back in 1939. This bell’s initial purpose was to ring every time the Bruins scored. However, an incident would occur a couple years later that would alter the bell’s fate forever.

How It All Started

As one might expect from a pair of rival colleges mere miles away from one another, the USC-UCLA rivalry is no stranger to the occasional prank. Some are as elaborately executed as the actual plays in the game itself. One prank in particular lives long in the memory and serves as the origin story of one of the rivalry’s defining features.

The year was 1941. UCLA had just defeated Washington State in its season opener. Little did they know that a covert group of students (reportedly from USC’s Sigma Phi Epsilon fraternity) had posed as Bruins, stole the keys to the truck which was used to transport the bell (with the bell inside, of course) and drove it back to USC headquarters.

That incident sparked an all-out prank war between the two which escalated to the point that it required an actual treaty signing to calm both parties down.

As per the condition of the treaty, USC would finally return the Victory Bell to its rightful owners – only on the condition that it would serve as the permanent game trophy to their rivalry, and whichever team won their annual meeting kept the bell.

It has since become a tradition that the winner also gets to paint the Victory Bell in their school’s color: “True Blue” for UCLA, or cardinal red for USC.

UCLA agreed to the treaty and the rest, as they say, was history. 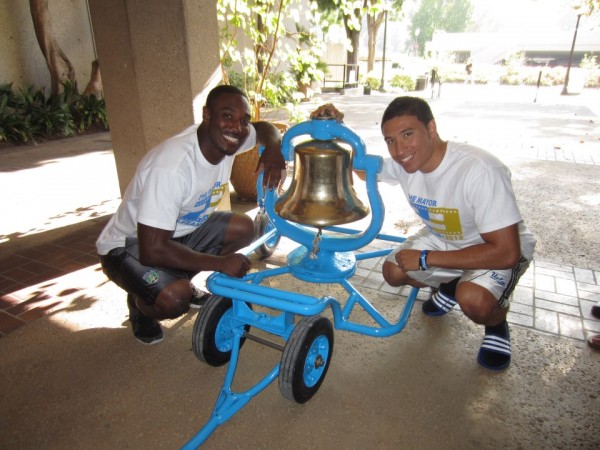 History of the Rivalry

As history would have it, having that overwhelming motivation to win the Victory Bell back had a positive effect on the Bruins, who only then won their very first game against their arch nemeses in December 1942, snapping an eight-game winless streak (USC had won five times with three ties).

UCLA hasn’t enjoyed much success since then, though, as their bell-stealing neighbors have had the Victory Bell in their possession for majority of their rivalry. The Bruins did have their moments, dominating the 50’s (six wins, three losses and a tie) and the 90’s. Their eight consecutive-wins from 1991-1998 stands as the longest winning streak for either team in the rivalry.

The Trojans reclaimed their dominance in the years after, winning 12 out of the next 13 games from 1999-2011. Head coach Pete Carroll was the main architect of that period, as he reigned from 2001-2009. However, two of those wins (2004 and 2005) under Carroll have since been vacated because the school was found to have been guilty of committing NCAA violations.

But thanks to back-to-back wins for UCLA in 2012-13 under Jim Mora Jr., the overall tally between the two schools is now USC 46, UCLA 30 with seven ties. 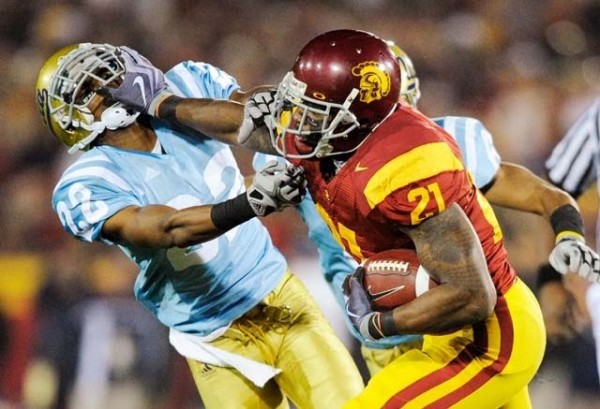 This year’s big game will have a little more than the Victory Bell on the line, though. USC and UCLA are still very much in the thick of the race for the Pac-12 South Division title. The loser crashes out while the winner takes one step closer to the conference championship game.

UCLA will come into the game the much hotter team, not to mention 3.5-point favorites. The Bruins have won four games in a row, including an impressive home win over ranked Arizona, and will have homefield advantage at the Rose Bowl.

Bruins quarterback Brett Hundley has played very impressively, with six passing touchdowns and four rushing in his last four games, and he leads UCLA to a third-consecutive Victory Bell victory over the Trojans.

Which color will the Victory Bell be painted when it’s all said and done? Create a betting account now and cash in on one of the marquee rivalries in college football.