The NFL has been suffering an epidemic as of late with a whole host of key players going down with season-ending injuries, and the NCAA isn’t far behind. On the bright side, none of those have been of the unspeakably excruciating variety, like these 10 gruesome sports injuries.

Here’s our list of the 10 most gruesome sports injuries:

The Redskins vs Giants rivalry is one of the fiercest in the NFL, but no amount of animosity could have made fans or players wish for what happened that Monday night in 1985.

Joe Theismann’s career ended before the entire nation’s eyes as star linebacker Lawrence Taylor hauled the quarterback down for a sack. But as other Giants joined in, the weight of their bodies fell on Theismann’s leg, causing his right tibia and fibula to snap like twigs.

As a proud Navy serviceman, Napoleon McCallum is all too aware of the numerous potential perils in that field of work. Ironically, his other job proved to be more physically damaging.

On the first Monday Night Football in 1994, Raiders running back McCallum horribly dislocated his knee after a routine tackle. He suffered a ruptured artery in his left knee, three torn ligaments, nerve damage, and torn calf and hamstring muscles. 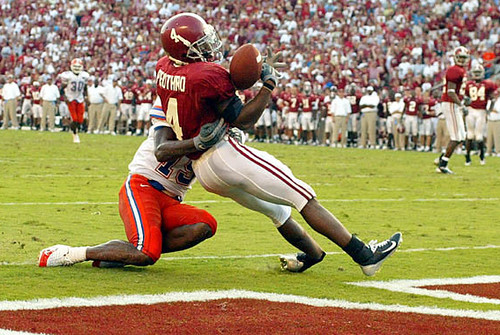 Tyrone Prothro won an ESPY Award for his incredible behind-the-head catch back in 2006, but he would probably trade that up for the opportunity to play football again.

Less than one month after his famous catch, Prothro suffered a nasty compound fracture of his left leg against the Florida Gators on October 2005. He hasn’t played a snap since.

It’s always tough seeing college athletes go down before they get a chance to go pro and make some money (insert multiple NCAA violations jokes here).

Willis McGahee and Marcus Lattimore were two such pro prospects who suffered significant knee injuries in college. McGahee tore his ACL, MCL and PCL in the 4th quarter of the 2003 National Championship Game and dropped from a top-5 pick to the late first round. Lattimore suffered similar injuries last season and has yet to see an NFL game.

Protruding bones and mangled knee ligaments are not pretty to look at, but these injuries are par for the course in most sports. Dislodged eyeballs, however, are not.

Not surprisingly, both notable eye injuries came in basketball games. Chasity Melvin and Allan Ray were both poked in the eye, causing their eyeballs to momentarily dislodge from their sockets. Thankfully, neither incident affected their eyesight long-term, but the images of their injuries are still incredibly disturbing.

There are freak injuries and there are FREAK INJURIES. Kevin Ware’s was definitely of the latter category.

Playing in the Elite Eight against Duke just last year, Ware jumped up to contest a three-point shot, something he has probably done thousands of times in the past. This time though, as he landed innocuously, his right leg inexplicably splintered in two to the total shock and horror of his teammates.

Coming out of high school, Shaun Livingston was all “knees and elbows,” but no one expected one of his knees to utterly explode after a routine layup attempt.

That layup came against the Charlotte Bobcats in 2007. After landing awkwardly on his left leg, Livingston dislocated his kneecap, tore his ACL, PCL and lateral meniscus, sprained his MCL and dislocated his patella and his tibia-femoral joint. 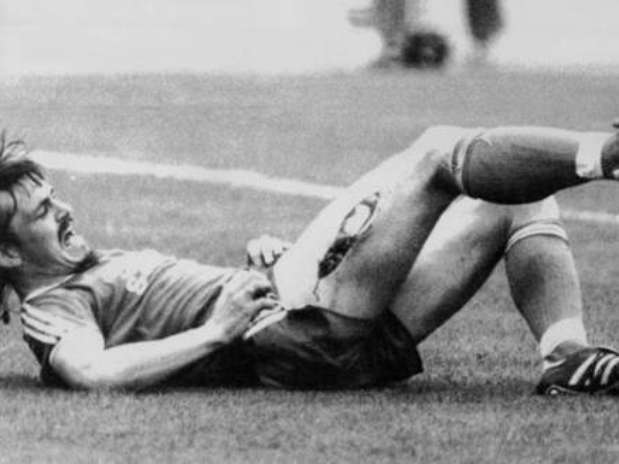 Soccer has had its share of horrific leg breaks (Oupa Ngulube and Djibril Cisse come to mind) so Ewald Lienen’s flesh wound doesn’t seem all too horrible. Until you actually see it.

Lienen was caught by an opponent’s studs in the thigh after a sliding tackle. That tackle opened a massive 10-inch gash which required 23 stitches to close. 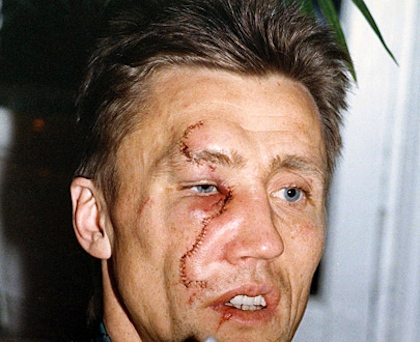 Not even Al Pacino can deny that Borje Salming is the ultimate Scarface.

The Hockey Hall of Fame defenseman was knocked down in front of his own team’s net when Gerard Gallant of the Red Wings accidentally cut Salming’s face with his skate blade. The injury required facial surgery and more than two hundred stitches to his face. Another reminder of why hockey players are some the toughest dudes around.

You know an injury has earned the title of “most gruesome” when three hockey players (AKA the toughest, most rugged men in sports) can’t keep their lunch at its very sight.

The St. Louis Blues-Buffalo Sabres game in March 1989 looked like a scene straight out of a gory slasher movie when Steve Tuttle’s skate caught Steve Malarchuk’s neck. Blood instantly came gushing out from the goalie’s throat, a ghastly sight that caused some fans to faint and two others to suffer heart attacks.

Malarchuk came within minutes of death because of that injury, which needed 300 stitches to close. Richard Zednik suffered a similar injury in 2008, but it caused nowhere near the amount of collateral damage.

Did you make it through the entire list? Think we missed any of the worst sports injuries ever? Share your thoughts with us on Twitter, Facebook and Google Plus, and check out lines and odds for your favorite brave athletes over at the sportsbook.