The two best heavyweights in the world will step into the Octagon for a third time in UFC 166, on October 19 at the Toyota Center in Houston, Texas.

The event’s headliner will see current champion Cain Velasquez and former champion Junior “Cigano” dos Santos complete their trilogy to determine once and for all who the “Baddest Man on the Planet” really is. The two fighters each have one victory over the other.[sc:UFC240banner ]

In the co-main event, undefeated heavyweight contender Daniel Cormier will face knockout artist Roy Nelson. Cormier, Velasquez’s teammate, has stated that it will be his last fight in the weight class before dropping to light heavyweight.

Also in the main card, two recent title challengers, lightweight Gilbert Melendez and flyweight John Dodson, begin their road back to another shot in their respective divisions when they face Diego Sanchez and Darrell Montague.

Betting on Cain Velasquez for UFC 166 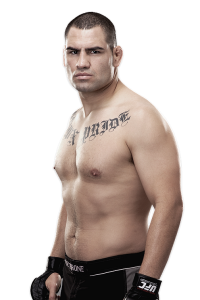 Velasquez is arguably the most complete fighter in the heavyweight division. The current UFC champion has used his combination of excellent wrestling, sound striking, speed and great conditioning in defeating his past three opponents.

Velasquez became the first Mexican-American UFC champion when he defeated the favored Brock Lesnar in 2010. Velasquez used his wrestling base to thwart Lesnar’s takedown attempts before pouncing.

In his first fight with Antonio “Bigfoot” Silva, Velasquez blitzed the big Brazilian with a takedown and dominated him on the ground for a TKO win. Their second fight was even quicker, with the champion dropping Silva with a right hand and finishing him off.

Velasquez lost the first fight against dos Santos, where he was slowed by a knee injury, via 64-second KO. But a fully healthy Velasquez thoroughly dominated the rematch. He rocked dos Santos early and used his superior conditioning to cruise to a unanimous decision.

The champion should use all those tools against Cigano in order to defend his UFC heavyweight championship for a record-tying second time. Bet on Cain Velasquez at Top Bet once odds are released. 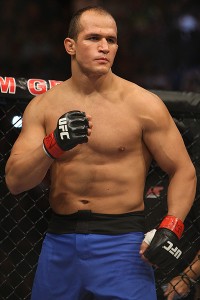 Dos Santos is an elite boxer who possesses considerable power in his hands. He quickly made his mark in the UFC with impressive knockouts of fellow Brazilians Fabricio Werdum and Gabriel Gonzaga, before earning his first UFC title shot.

It took Cigano just over one minute and one right hand to include Velasquez in his knockout highlight reel and ultimately win the UFC heavyweight championship in 2011.

In his most recent fight, dos Santos stopped the notoriously tough Mark Hunt, who had been on a four-fight winning run. Cigano battered his opponent and finally dealt the critical blow with a spinning heel kick knockout.

Dos Santos has very good takedown defense, vital against a wrestler like Velasquez. However, he was rocked with a right hand early in the rematch and never fully recovered, which opened the door for Velasquez to take him down 22 times.

If the Brazilian can avoid Velasquez’s takedowns (or fight-altering right hands) and keep the fight off the ground, his significant edge in striking gives him a great chance of reclaiming the championship. Bet on Junior dos Santos at Top Bet once odds are released.

* UFC 166 betting lines and full fight card will be updated once they have been announced.