The new soccer season is now well underway across Europe. This year is a World Cup Year (the season directly preceding the World Cup) and soccer will go on until the summer of 2014 in Brazil.

Before then, a lot of soccer is still to be played in Spain, England, across Europe, and elsewhere around the world. Let’s preview how things could shake up in these competitions.

What to Watch for in the 2013 Soccer Season: The Favorites:
Soccer giants Real Madrid and Barcelona have dominated the top of the La Liga standings for many years. Such is their dominance that they have finished 1-2 in some order for 8 of the past 10 years, and both are ready to do it again this year.

Champions Barca have added Brazilian phenom Neymar to their talented squad, while Real look poised to break the world transfer record for Welsh winger Gareth Bale in their bid to regain the title from their archrivals.

Intertwined with the rivalry of these famous clubs is the duel between the world’s top two players: Real’s Cristiano Ronaldo and Barca’s Lionel Messi.  The two have stood atop the soccer hierarchy for five years. Try as Ronaldo might, Messi seems to have bested him in both team and individual achievements.

For those looking for some sure-win games, place your soccer bets on Real Madrid and Barcelona at Top Bet throughout the season.

La Liga might not be for fans of unpredictability and parity, but its appeal is undeniable.

Twice during the La Liga schedule, the world tunes in to watch Real Madrid and Barcelona play in “El Clasico,” where the world’s best players battle for Spanish supremacy. And of course, the world is treated to the history-making magic of Messi.

Unlike in La Liga, the English Premier League standings will be a little less predictable at the top. This season will be especially interesting, with 3 potential title challengers.

The champions, Manchester United, may find it hard to defend their crown without their iconic manager, Sir Alex Ferguson, who retired at the end of last season. However, they still have the core of their title-winning team intact, led by the league’s top goalscorer, Robin van Persie.

Factor in the return of controversial manager Jose Mourinho to renew Chelsea’s title challenge and this might be the tightest championship race in some time.

The Premier League is deep enough that even these big clubs could be shocked by the minnows. Check out Top Bet’s soccer lines posted the week of the game and find those hidden upsets.

Since its inception in 1992, the English Premier League has been known for its fast-paced, exciting brand of soccer, supporting its claim as the best league in the world.

Clubs like Manchester United and Arsenal have long been proponents of attractive, attacking soccer, and have featured such stars as Thierry Henry, Dennis Bergkamp, Eric Cantona and Cristiano Ronaldo.

In terms of excitement, nothing can compare to the 2011-12 season’s dramatic conclusion, when Manchester City scored twice in injury time to defeat Queens Park Rangers and win the league title over rivals Manchester United on goal difference in the final game of the season. 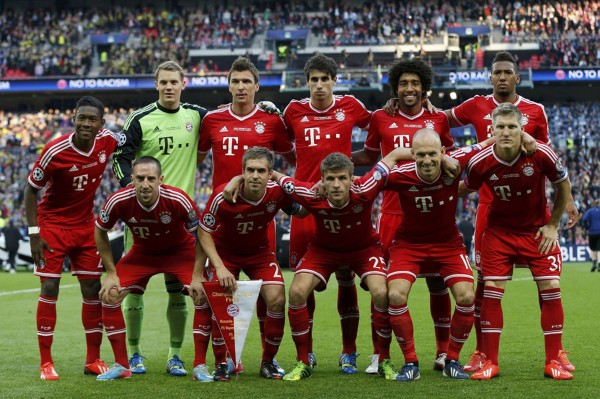 The UEFA Champions League schedule may provide the reigning champions stiff competition from Spain (Real Madrid and Barcelona) and England (Manchester United, Manchester City, Chelsea) but also from within Germany.

Last year’s defeated finalists Borussia Dortmund may have lost Gotze to rivals Bayern, but they have reloaded their forces in hopes of another run in the tournament. Forward Robert Lewandowski, who was also a Bayern target, remains with the club to spearhead a lethal attack with Marco Reus and new sign-on Henrikh Mikhitarian.

The UEFA Champions League is regarded as the greatest club competition in the world, and rightly so.

This tournament, pitting the best against the best, has been the stage for some of the greatest late game dramatics in soccer history, from Manchester United scoring two goals in injury time to beat Bayern Munich in 1999 to Liverpool staging a miraculous fight back from 3-0 down to defeat Milan in penalties in 2005.

And just last season, Borussia Dortmund staged its own dramatic comeback, netting twice in injury time to knock out Malaga in the quarterfinals.

Japan, Iran, South Korea and Australia have already stamped their tickets to the 2014 World Cup, together with host country, Brazil. Only 27 slots remain up for grabs, 13 of which will come from UEFA, the European association.

With three quarters of World Cup Qualifying 2014 done, perennial favorites Italy, Germany, Netherlands and world champions Spain are all currently top of their respective groups and are in good shape to go to Brazil. England and France are currently second in their groups, which would place them in a playoff with other group runners-up.

Over in South America, Messi’s Argentina is top, with Colombia and Ecuador occupying the two other automatic berths.

Soccer is the world’s game and the World Cup is its biggest contest. With hundreds of millions of viewers from all continents, the world is literally watching.

Due to the massive scope of the World Cup’s coverage, its memory lives long within people from all countries. Soccer legends, like Pele playing as a teenager and scoring in the final or Diego Maradona and his infamous Hand of God, were immortalized by their performances in the World Cup.

As you follow the long and exciting soccer season, don’t forget to check out International Soccer betting andChampions League lines posted on the week of the games here at TopBet.eu. Get betting!