Week 11’s less-than-stellar schedule provided shocks aplenty, as three of the top four seeds in the College Football Playoff rankings fell. Will we some more big upsets in Week 12, which will be headlined by the battle atop the Big 12 between Oklahoma and West Virginia? Find out below as we provide against the spread picks and predictions for the top 10 games of the Week 12 college football slate.

Louisville’s playoff hopes are back alive after Clemson’s loss. The Cards almost threw it all away as they were down through three quarters at home against Wake Forest. Of course, they then scored 34 points in the fourth to win 44-12.

The Cards have been frustratingly inconsistent since their loss to Clemson. But with the playoffs back within reach, they should come out with a much stronger sense of urgency against Houston. Lamar Jackson, in particular, should be much sharper. He had only one touchdown against Wake, just the second time he hasn’t accounted for at least three scores this year. 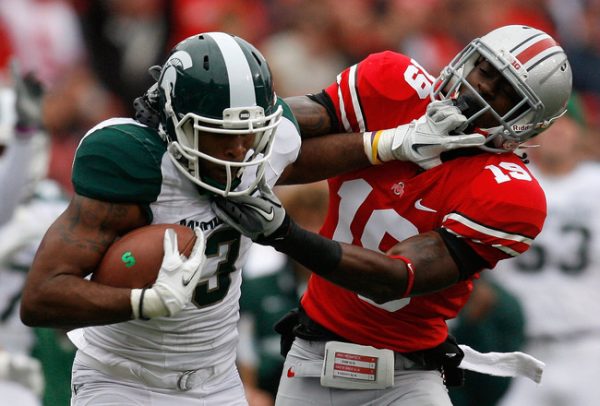 So, Ohio State has won its last two games by identical 62-3 scorelines, and has jumped up to No. 2 in the AP Poll after Michigan’s loss. That now puts the Buckeyes in the driver’s seat for the Big Ten East title.

There’s a possibility the Buckeyes begin to look ahead to that winner-take-all matchup with Michigan at home. But with the way they’ve been playing, it doesn’t seem likely that they take any chances against Michigan State.

TCU’s 62-22 thrashing of an unbeaten Baylor in Waco is getting less impressive by the week. The Bears are showing that they were really a paper tiger with flaws in the passing game and on defense. Meanwhile, TCU’s offense – and quarterback Kenny Hill in particular – remains too inconsistent to trust.

Oklahoma State, on the other hand, is the real deal offensively. The Cowboys have hung up an average of 40 points on the two best defenses in the conference (West Virginia and Kansas State). Mike Gundy’s squad has also had TCU’s number. The Cowboys are 3-1 (SU and ATS) in four career meetings with the Horned Frogs.

After getting shut out by Bama, LSU resumed normal service under Ed Orgeron with a 38-10 dismantling on the road against Arkansas, the same Arkansas team which ran all over Florida. The Tigers are now 4-1 against the spread under Coach O, and have scored at least 38 points in those wins.

Derrius Guice and Leo Fournette combined for 360 yards and five touchdowns against the Razorbacks’ porous run defense. Florida should offer a bit more resistance than Arkansas, but the Tigers should have more than enough to beat the Gators.

Washington State in the Pac-12 title game? It’s possible! The Cougars are still a perfect 7-0 in conference after they demolished Cal, 56-21. However, they’re set to face arguably the best defense in the entire conference in Colorado, whom the Cougs could yet meet in the title game.

The Buffs, who are 9-1 against the spread this season, are just incredibly balanced. Their offense isn’t quite as explosive as the Cougs’, but it is brutally effective. Meanwhile, despite the improvement of the Wazzu defense, you’d still fancy this Colorado D to at least contain Luke Falk.

Michigan’s shakiness on the road is for real. It’s one thing to only beat a bad Michigan State team by just nine points. It’s another to lose to a mediocre Iowa team. That loss should spark quite a response from the Wolverines, though. They’ve won their last two home games by a combined score of 110-11.

Meanwhile, Indiana has fallen quite a bit in recent weeks. The Hoosiers struggled to beat Rutgers, and were beaten by 14 by Penn State at home.

Michigan is likely going to win; it’s 10-0 all-time against Indiana. The only question is by how much. The answer: A lot. 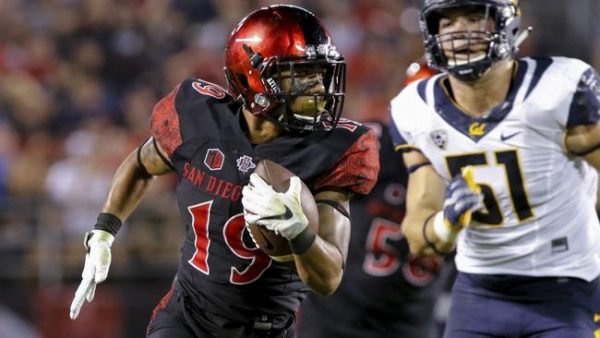 San Diego State’s spot in the Mountain West title game is all but secured; the Aztecs can now knock off Wyoming from contention in the Mountain Division after the Cowboys lost 69-66 in triple-overtime to UNLV last week. The Aztecs’ prolific rushing attack led by Donnel Pumphrey has simply been unstoppable. They’re averaging 294 yards per game and 6.17 yards per carry (both 5th in the country), which is why they’re 6-0 in conference.

Can Wyoming keep that running game in check? Probably not. The Cowboys couldn’t contain Boise State’s Jeremy McNichols (18 carries for 143 yards) and were gashed for 402 yards and five touchdowns by UNLV.

With all due respect to Army, Notre Dame didn’t exactly beat a top defense en route to a 44-6 win over the Black Knights. The Irish’s pass defense remains pretty spotty – it was burned by the two best quarterbacks it’s faced (Shane Buechele and Brad Kaaya) – and Virginia Tech’s Jerod Evans has the ability to exploit that.

Despite the Hokies’ shock home loss to Georgia Tech, they are still the better team than the Irish. Their defense should bounce back after getting burned by the Yellow Jackets’ triple-option attack.

Oklahoma is undoubtedly outstanding offensively. The Sooners are in the top 10 in the country in scoring, averaging 44 points per game. The two-headed monster of Samaje Perine and Joe Mixon is outstanding, while Dede Westbrook has caught a touchdown pass in all seven conference games.

They have their problems on defense, but the Sooners offense should be good enough to simply outscore a well-balanced West Virginia attack. They could even gain a few extra possessions against a Mountaineers offense which has surrendered seven turnovers in its last two road games.

Don’t look now, but USC has a chance to make it to the Pac-12 title game. The Trojans have won six games in a row, and are coming off a huge 26-13 road win over previously unbeaten Washington.

Don’t expect a drop-off either as they face their city rivals UCLA. The Trojans have lost each of their last two trips to Pasadena, but will have a great opportunity to snap that skid against a Bruins team that is without star quarterback Josh Rosen.