With no Serena Williams in sight, the WTA Tour’s women’s singles draw at Roland Garros is wide open for the taking. In turn, a handful of the world’s top female tennis players will vie not just for the French Open title, but also for a possible shake-up atop the world rankings.

There’ll be plenty of drama, excitement and upsets to go around in lovely Paris. As such, our preview below should serve as a guide on the mademoiselles worth keeping tabs on for the second and much-awaited Grand Slam tournament of 2017.

After a slow start this season, World No. 4 Simona Halep has been on quite a torrid tear of late. Four of the 2014 French Open finalist’s five semifinal appearances have come over the last four tournaments, which includes a victory in Madrid just a couple of weeks ago.

Furthermore, Halep has only lost one match on clay this year, improving her record on the turf to 24-3 dating back to the previous season. The Romanian will also be crowned as the top female tennis player in the world if she does indeed win her first-ever Grand Slam title, and that’s probably the main reason why the oddsmakers have her as the current front-runner at Roland Garros.

It’s been quite a rollercoaster of a 2017 campaign for Garbine Muguruza, who has four quarterfinal and two semifinal appearances thus far, but also has three first-round exits in nine tournaments overall.

Like a lot of Spanish standouts, though, Muguruza’s play turns up a notch whenever she steps foot on clay. She’s hot off an 11-2 record on the surface from 2016, and her semifinal berth at the recently-concluded Italian Open also serves as terrific momentum heading into Roland Garros.

Oh, and haven’t we mentioned that the 23-year-old is the defending French Open champion, and that she’s made it to no less than the quarterfinal round in all three previous editions of the tournament? 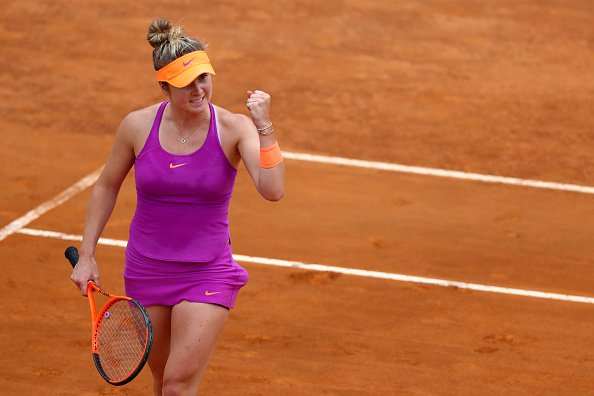 Its about time we take 22-year-old Elina Svitolina seriously. The Ukranian upstart now has four wins under her belt this year, having just stolen victory from Simona Halep’s grasp in Rome this past weekend.

What’s more impressive is that Svitolina has proven to be a nuisance to the Tour’s marquee players this entire season. She’s 6-2 against top-10 opponents thus far, with three upsets in three meetings against top-ranked Angelique Kerber (+800) along with a couple more shockers over World No. 3 Karolina Pliskova (+1,000). Her quarterfinal finish at the 2015 French Open, by the way, is her best and only quarterfinal placing in 18-career Grand Slam appearances.

Svitolina seems to be the WTA’s giant slayer of 2017, so hop on her bandwagon now before it’s too late.

Venus Williams will try her best to make up for the absence of her sister Serena, and she’s also definitely playing for more than just her family’s pride and enduring excellence.

The French Open is one of two Grand Slam tournaments that has eluded the elder Williams sibling – the other being the Australian Open. But let’s not forget: she’s hot off her first finals appearance in Melbourne in 14 years this past January, so a return to Roland Garros’ final stage since 2002 isn’t that far from happening as well.

A 17-6 record with four quarterfinal appearances this year isn’t shabby at all. If you’re counting on an American to win this year’s French Open, there’s no better choice than the other half of the Williams powerhouse tandem.

There were flashes of brilliance this year from 44th-ranked Irina-Camelia Begu, particularly when she made back-to-back, solid runs on the clay courts of Charleston (quarterfinal finish) and Istanbul (semis) this past April.

However, the 26-year-old Romanian still has a long way to go before being considered as a real threat in the WTA Tour, let alone at Roland Garros. Only one of Begu’s 13 losses this season came at the hands of a top-10 player, and with nine of those 13 defeats coming from the very first round of the tournament against relatively weak opposition.

Svitolina (+1,200) denies victory from her top-10 competition all over again as she wins her first-ever Grand Slam title.

Create a betting account now to win big from the second Grand Slam tournament of the year!