So far so good for the San Diego State Aztecs. They went a perfect 8-0 in the Mountain West this season after a 31-14 beatdown of Nevada in the regular season finale. The Aztecs now face the Air Force Falcons for the conference title, who have won five of their last six heading into this game. Can San Diego State continue its dominance of the conference?

If you’re looking for more action this championship week, then head over to our complete previews for Temple vs. Houston and Michigan State vs. Iowa.

After losing to Colorado State earlier in the season, the Air Force Falcons went on a 5-0 unbeaten romp to secure the Mountain Division along with a spot in the conference title game. They seemed quite disinterested in their regular season finale, losing 47-35 on the road to the New Mexico Lobos.

[sc:NCAA240banner ]Prior to their loss to New Mexico, the Falcons have looked dominant. They outgained their last five opponents prior to the regular season finale loss by at least 140 yards. They’ve also been unshackled on the ground, outrushing seven opponents in a row with five by at least 180 yards.

It’s no secret what Air Force plans to run the ball. They’re the best rushing offense in the entire conference, averaging 323.5 yards per game. They also have a conference-high 39 total rushing touchdowns this season. The Falcons don’t get much going through the air, averaging just 138.6 yards per game.

Junior running back Jacobi Owens leads the way with 857 yards and six touchdowns, while Karson Roberts has scored more with a team-high nine touchdowns. D.J. Johnson and Timothy McVey could also be solid options with six touchdowns each.

Having Air Force repeatedly running the ball should help eat up the clock, resulting in less time of possession for the Aztecs. The Falcons also have a pretty strong pass rush to keep San Diego off the field. The Falcons rank first in the Mountain West with 36 sacks this season. Senior defensive lineman Alex Hansen leads the way with 7.5 sacks, while junior linebacker D.J. Dunn is a step behind with six.

The Falcons are 5-1 ATS in their last six games. 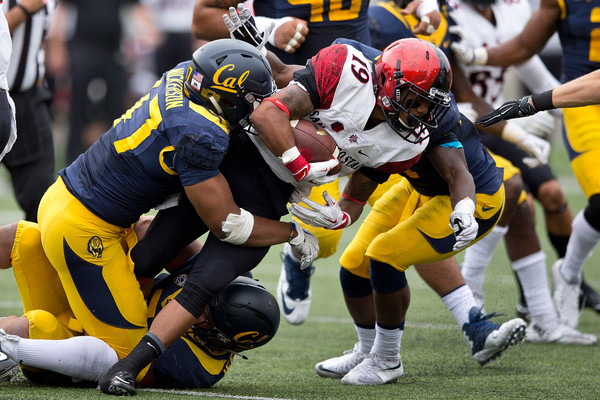 The San Diego State Aztecs are entering this game on the heels of an eight-game winning streak. The Aztecs put up a strong offensive performance in their regular season finale, outgaining Nevada 408-263 yards in a 31-14 victory on Saturday. San Diego State has now outgained each of their last eight conference opponents.

The Aztecs rank 11th in the Mountain West in passing offense with 138 yards per game. They’ve been very good at avoiding mistakes with 14 touchdowns to just three interceptions. But with their starting quarterback Maxwell Smith out due to a torn ACL, the Aztecs may rely on their rushing more in this conference title game.

San Diego State ranks third in the conference in rushing offense (235.5 yards per game and 28 total rushing touchdowns). Junior Donnel Pumphrey has been the Aztecs premier running back with team-highs in carries (268), rushing yards (1,464) and touchdowns (16).

Pumphrey will be hard pressed to beat a solid Air Force front seven, which ranks third in the Mountain West in rushing defense (139.5 yards per game). Senior Chase Price offers a change of pace back with 889 yards and six scores on 159 carries.

On the other side of the ball, San Diego State ranks second in the conference in tackles for loss (89). Their front seven has been strong at the line of scrimmage, hindering their opponents to gain plenty of yards. This will be extremely useful against a run-first team like Air Force. Alex Barrett has been solid tackler as a defensive lineman with 12.5 tackles for loss. Linebacker Calvin Munson has also been strong with a team-high 14 tackles for loss.

The Aztecs are 4-0 SU/ATS in their last four at home.

This game will go down to the wire. Take Air Force at +5 as the underdog. Create a betting account now and win big on championship week.