Best Games to Bet On This Weekend: Spurs vs. Mavericks & Blue Jackets vs. Penguins

The Dallas Mavericks showed they’re not going to be pushovers in the Playoffs after manhandling the San Antonio Spurs in Game 2. At home in Game 3, will Dallas snatch the series lead, or will San Antonio get back at the Mavericks? In another tied series, the Pittsburgh Penguins look to repulse the never-say-die Columbus Blue Jackets in Game 5 of their Stanley Cup Playoff series.

Betting on the San Antonio Spurs

[sc:NBA240banner ]After a 21-point loss (92-113) to Dallas in Game 2, largely because of their inability to take care of the ball, the Spurs now visit the Mavericks for their first road game of the Playoffs.

The Spurs have been undefeated in two games at American Airlines this season. Moreover, they are 4-0 SU and ATS in their last four games there.

Despite the improved bench scoring led by Manu Ginobili’s 27-point effort, San Antonio was still blown out after committing 22 turnovers (Ginobili had six). It’s clear that the Spurs need to cut down on their turnovers against a dangerous team like Dallas.

With the loss of so many possessions on offense, the Spurs had a hard time setting up scoring opportunities. They only had 17 assists in Game 2, which is way short of their 15.5 APG season average.

Betting on the Dallas Mavericks

After combining for only 30 points in Game 1, the trio of Monta Ellis, Shawn Marion, and Dirk Nowitzki rebounded in Game 2 and scored a total of 57 points. Of the three, Marion was the most impressive as the versatile forward went 8-10 from the field for 20 points.

Aside from the return to fine form of their starters, the Mavericks also got encouraging performances from their bench, which scored 40 in Game 2. Bench scoring will be pivotal for the Mavs, as San Antonio is No. 1 in the NBA in that department. If they could not entirely stop the Spurs’ relievers, then they might as well match them point-for-point.

The Mavericks are 3-0 ATS in their last three games. They have also gone under the line in seven of their last 10 home games.

The Spurs will carve out a morale-boosting win in a close contest, while the Mavericks will cover +3.5.

Betting on the Columbus Blue Jackets 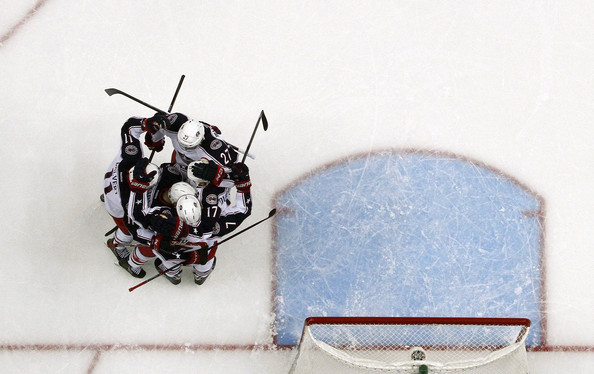 The Columbus Blue Jackets just won’t go away.  Despite falling behind 0-3 early in Game 4, the Blue Jackets fought back and won in overtime, 4-3, to knot their series against the Pittsburgh Penguins.

Columbus is the hottest team on the power play in the Playoffs. The Blue Jackets struck twice against Pittsburgh’s penalty kill in Game 4, pushing their power play goals total to five, the most by any team in the postseason.

The Blue Jackets have been turning on the heat against Marc-Andre Fleury, peppering him with a barrage of shots throughout the series. In Game 4, Columbus outshot the Pens, 46-25. In the series, the Blue Jackets still have the advantage, 145-140.

The Blue Jackets take the road anew for Game 5 of the series against Pittsburgh. They have won seven of their last 10 road games.

The Pittsburgh Penguins know it’s not going to be an easy series against the Blue Jackets, but even so, losing twice to Columbus in a playoff series could be something they never expected.

To prevent a catastrophic first round exit, the Penguins must fix their bumbling penalty kill. They’ve allowed the Blue Jackets’ special team to find the back of the net five times already in the series. Their 71.4% PK% is third worst in the Playoffs. The duo of Evgeni Malkin and Sidney Crosby also need to deliver their share of goals for the Pens, as both players are yet to register a goal in the series.

The Penguins could snatch the series lead back in Game 5 at home. They are 4-1 in their last five games against Columbus at Consol Energy Center.

At least one from Evgeni Malkin and Sidney Crosby will have his breakout game in Game 5, leading the Pens to a win. With Marc-Andre Fleury’s confidence rattled by the pesky Blue Jackets, it’s going to be another high-scoring game so take the over too.