With the pros in the NBA enjoying a much-needed break, the soon-to-be-pros of college hoops take center stage with a pair of exciting matchups to start the week. In the ACC, No. 2 Virginia looks to remain undefeated without Justin Anderson as it hosts Pittsburgh. And later in the night, Big 12-leading Kansas flies into West Virginia to take on the struggling Mountaineers.

Get prepped for a big night of college hoops action right here. And for more of the week’s hottest hoops action, check out our previews of Wake Forest vs. Notre Dame and North Carolina vs. Duke.

[sc:NCAAB240banner ]No. 2 Virginia has won its first two games without second-leading scorer Justin Anderson, but only just. The Cavaliers ground out back-to-back wins over NC State (51-47) and Wake Forest (61-60). Virginia is just 1-5 against the spread in its last six games. Leading scorer Malcolm Brogdon (13.6 points per game) has continued his struggles from the field. He’s shooting just 34 percent in his last four games.

Meanwhile, Pitt is coming off a big 89-76 win at home over No. 12 North Carolina on Valentine’s Day. Sophomore Sheldon Jeter exploded for a career-high 22 points, his second 18-plus point outburst in his last three games. However, both of those games have come at home. Pitt has gone just 1-4 (0-4-1 against the spread) on the road in conference play.

Virginia guts out another close win as Pittsburgh covers. 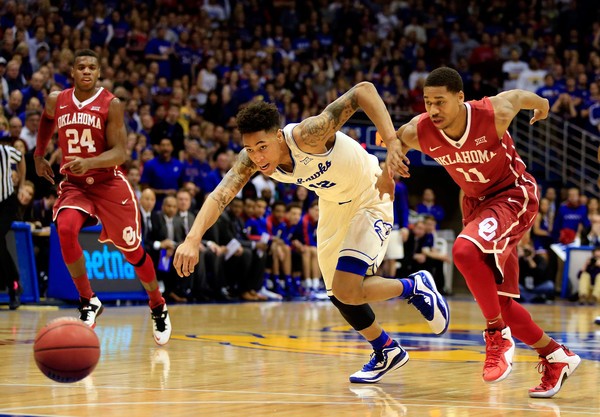 No. 8 Kansas scored its fourth straight win over a ranked opponent with a 74-64 victory over No. 16 Baylor. Freshman Kelly Oubre Jr. and junior Perry Ellis led the Jayhaws with 18 points apiece. Kansas is now 7-1 (5-3 against the spread) in its last eight games and owns a two-game lead atop the Big 12.

Kansas scores a double-digit win to cover on the road. Create a betting account now and get caught up in the best college hoop games on offer today.