Can’t get enough sports action? Well tonight’s your lucky night as we’ve got two blockbuster games that will definitely satisfy your sporting appetite. Kicking things off this evening is Game 1 of the American League Championship Series between the Kansas City Royals and the Toronto Blue Jays.

Then, over in the NCAA, the No. 21 Boise State Broncos and the Utah State Aggies lock horns in the featured college football matchup. Read on below for a quick breakdown of these two important games and while you’re at it, you can check out our 2015 ALCS predictions here.

[sc:MLB240banner ]After recording spectacular comeback victories in their respective division series, the Toronto Blue Jays and the Kansas City Royals resume their quest for the coveted World Series title when they square off in Game 1 of the ALCS later tonight. Starting for the Blue Jays in this series opener is Marco Estrada. He was solid in his last postseason start, throwing 6.1 innings of one-run ball in Toronto’s 5-1 win over Texas in Game 3 of the ALDS.

The Royals, on the other hand, will have Edinson Volquez as their starting pitcher tonight. He picked up the loss in his last postseason start, allowing three runs in 5.2 innings of action in Kansas City’s 4-2 defeat to Houston in Game 3 of the ALDS. It won’t get any easier for him against the Blue Jays in Game 1. Toronto leads the majors in runs scored this postseason with 26.

The Blue Jays are 4-3 against the Royals in their last seven games. 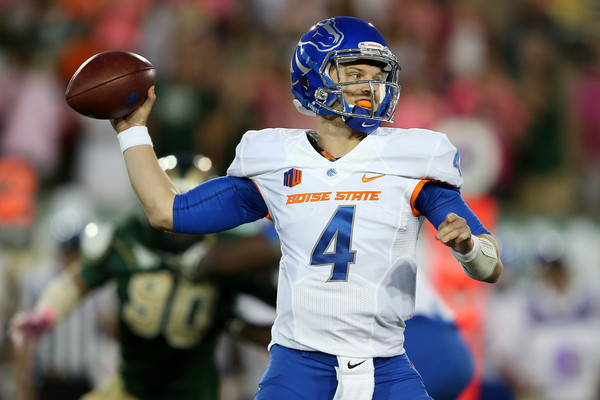 Boise State will head to its Mountain West showdown with Utah State with momentum on its side after trouncing Colorado State, 41-10, on Saturday night. It was another impressive victory for the Broncos who have now won four games in a row. The Broncos have won their last four games by an average of 47.5 points.

Starring for the Broncos in their latest victory was Brett Rypien. He completed 22 of 35 passes for 339 yards and a touchdown with one interception. He will have his work cut out for him, however, against a Utah State defense that’s allowing just 297.4 total yards per game, 18th in the FBS. The Aggies are fresh off an emphatic 56-14 win over Fresno State on Saturday.

That being said, the Broncos will fancy their chances against the Aggies as they are playing some excellent football of late. The Broncos are averaging 51.0 points and 549.0 yards of total offense during their four-game winning streak.

The Broncos are 5-0 SU and ATS in their last five road meetings with the Aggies.

Boise State wins, 38-13. Create a betting account now and bet on the best games for tonight.