Golden State overtook the Clippers for the top spot in the Pacific division after knitting together 10-straight wins, making Mark Jackson’s team the hottest in the league. Meanwhile, the Raptors are carving up their own niche in the Atlantic division with their improving performance, getting the attention of not just basketball fans but also bettors hunting for a new team to lay their luck on.

The Warriors and Raptors claim the top two spots on this list, and joining them are the Kings, Bulls, and Spurs.

Next Games: @Nets, vs. Celtics, vs. Nuggets

With Andrew Bogut and David Lee cleaning the glass like crazed Dennis Rodman clones, the Warriors duo of Stephen Curry and Klay Thompson are being given extra confidence. The Warriors are peaking right now and they’re becoming terrifyingly good. Golden State battered the Bucks (101-90) Tuesday night to record the franchise’s first 10-game win streak since the days of Rick Barry in the mid-70s.

Next Games: vs. Pistons, vs. Nets, vs. Bucks

Almost immediately after the blockbuster trade with Sacramento last December, the fortunes of the Raptors changed positively. Since seeing Rudy Gay and company go to Sacramento, the Raptors are 9-5 SU and even beat Indiana once while also staying close in a loss to Miami. They even seized top spot in the otherwise horrible Atlantic division. Toronto is 7-0 ATS in its last seven games.

Next Games: vs. Pistons, vs. Nets, vs. Bucks 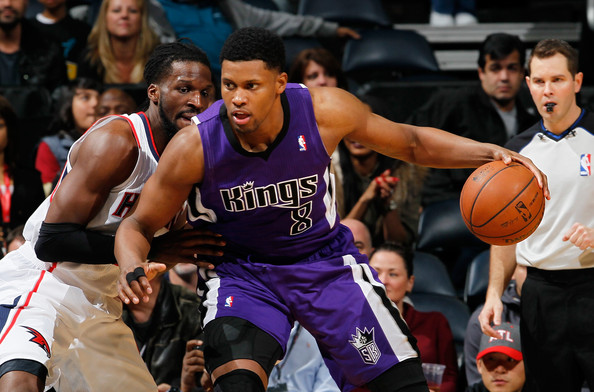 Unlike their trade partner last December, Toronto, the Kings did not make any discernible improvements in the standings after the deal. If anything, they improved their scoring in their last 10 games to 106.7 PPG compared to their season average of 100.6 PPG. The addition of Rudy Gay gave the Kings a new option on offense. Give this squad more time to gel and they could be a strong team in the future. For now, bettors can capitalize on the Kings’ 9-1 OVER record in 10 games. [sc:NBA240banner ]

Next Games: @Bucks, vs. Bobcats, vs. Wizards

Have the Bulls hit the reset button? It sure looked like it when Chicago shipped Luol Deng to Cleveland in exchange for Andrew Bynum and three draft picks. Without Derrick Rose and his future up in the air, the Bulls would rather start over. But don’t expect them to lay low on defense. They are giving up 92.2 PPG, the second best in the NBA. The Bulls are 7-1 UNDER in their last eight games overall.

Next Games: vs. Mavericks, vs. Pelicans, vs. Jazz

The boring, old Spurs, as some would say, are putting up points on the scoreboard, effectively betraying all the names their detractors have been calling them for years. The Spurs are averaging 104.4 PPG this season, ranked No. 7 in the league. In the last 10 games, San Antonio has been shooting 47.1% from the field for 108.0 PPG. The Spurs are 4-1 OVER in their last five games.

Head over to the sportsbook and check out lines and odds for all of these teams’ games this NBA season.