Best Tom Brady Moments and Performances of All Time

If there was a dictionary entry for the phrase “big-game quarterback,” there would most likely be a picture of Tom Brady  right beside it. From the moment he took over as starting quarterback for the New England Patriots in 2001, just about all Brady has done is lead the Pats to big wins. Some have been incredible performances from a gifted player inexplicably drafted 199th overall, and others have been through sheer power of will.

As Brady heads into his twilight years (and deep into the 2014-2015 NFL playoffs), let’s look back at some of those standout performances in his glittering, Hall of Fame-worthy career. There are admittedly a ton of those to choose from, but in picking the best handful of games, the statistics have also been weighed with the significance of the stage or situation which the game was being played.

That means a playoff game will have a little more weight than the regular season, no matter how enticing the numbers are, and other extenuating circumstances will also be considered.

And so with those criteria in mind, here are the best performances in Brady’s illustrious career. If it’s career retrospectives you’re after, check out our list of Peyton Manning’s top performances before reading on.

[sc:NFL240banner ]2007 was Tom Brady’s best season statistically and the Patriots’ best ever regular season, which they finished a perfect 16-0. And Week 7 against the Dolphins was his best game in that perfect season. Brady threw six of his then-NFL record 50 touchdowns during that game alone and recorded the first of his two career games with a perfect passer rating of 158.3.

So why does this game against the Titans rank higher than Brady’s “perfect game” against the Dolphins two years prior? Well, apart from Brady throwing for five of his six touchdowns in one incredible second quarter, he also accumulated all those gaudy stats in just 2 1/3 quarters! He was yanked after throwing his sixth touchdown to Randy Moss with 10:17 left in the third quarter. 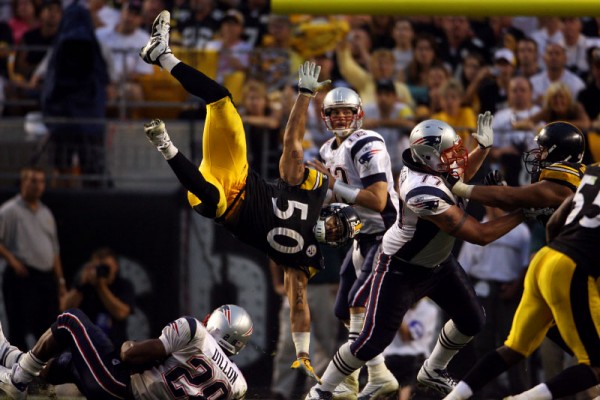 If Michael Jordan had “The Flu Game”, Tom Brady had the NFL equivalent.

Let’s set the stage first. Brady and the Patriots were on the road against the 15-1 Steelers in the AFC Championship Game. In the night prior to the big game, Brady was burning up with a 103-degree fever and was having chills.

He played the next day, outdoors in 11 degree temperature, and played incredibly well considering he had an IV injected into his arm just hours earlier. He recorded a 130.5 passer rating, by far his best playoff rating at the time and third-best in his career, to lead the Pats to a 41-27 win and a third trip to the Super Bowl in four years.

The Tom Brady-Peyton Manning rivalry will go down in the annals of football as the greatest quarterback rivalry the sport has ever known. Their regular season clash in 2013 was arguably Brady’s best performance in the epic rivalry.

The Patriots were at home, but went down 24-0 to Manning’s Broncos in the first half. At halftime, the Pats’ win probability was sitting at 0.50 percent. Half a percent!  But with Brady, there’s always a chance. He went to work in the second half and led the Patriots all the way back from 24 points down to eventually win in overtime in what was one of the best regular season contests in recent history.

In terms of both the stage/situation and his statistical contribution, Brady was never better than in his game-winning Super Bowl performance against the Panthers. Brady set a new Super Bowl record with 32 completions and the 354 yards he threw is still his second-highest total in the playoffs.

And just as he did during his first Super Bowl, Brady led the Pats down the field with under two minutes left for Adam Vinatieri to get in range for the game-winning field goal.

If you want to bet on Brady and the Patriots, create a betting account now and let the all-time great win you some money.