With a two-game winning streak heading into Thursday, the Detroit Red Wings look to seek revenge from a loss to the San Jose Sharks earlier this season. This time around, the Red Wings will seize any advantage coming from the fact that the San Jose has been playing terribly on its own home ice.

Will Detroit extend their positive run to three games, or will the Sharks take another bite out of the Wings? Let’s quickly break down this compelling matchup below. Then, check out more of Thursday night’s hockey slate with our previews for Toronto vs. Los Angeles and Philadelphia vs. Minnesota.

[sc:NHL240 ]Boy, what a delight rookie Dylan Larkin has been. The 19-year-old breakout star is the Detroit Red Wings’ only representative in the All-Star game, and has certainly been the team’s anchor all season long.

Larkin currently leads his team is goals scored (14) and is second only to Henrik Zetterberg in total points with 27. His latest heroics most recently came from the 1-0 win over New Jersey on Monday, where he scored Detroit’s lone goal and a huge game-winner at that.

Even goalie Petr Mrazek has been sensational of late, posting a 1.96 goals-against average over his last five outings. Count on Mrazek to start Thursday’s game to ensure that the Sharks won’t find the net as often as they should.

What the Red Wings have to avoid, though, are those costly penalties that they’ve been coughing up quite a bit recently. For the past five contests, they have surrendered six goals over 14 power play situations. 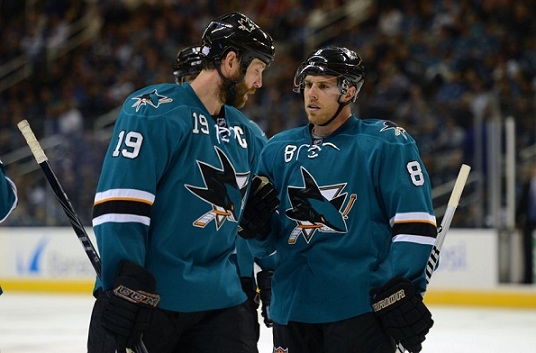 In the San Jose Sharks’ 4-1 loss to the Winnipeg Jets on Saturday, Brent Burns was the only bright spot for the team. Burns scored his 16th goal of the season to lead all defensemen in scoring this season, and his play on offense earned him an All-Star nod along with Joe Pavelski. Meanwhile, Joe Thornton is on an eight-game point streak himself after dishing out the assist for Burns’ goal against the Jets.

Yet somehow, the Sharks are still pretty dysfunctional in spite having their three best players playing at a high level. To make matters worse, the team is doing much better away from home than in front of its home fans in The Shark Tank.

San Jose is the worst team in the league right now on home ice, sporting a dismal record of 5-11-0 with no back-to-back victories to date. They’re currently in the midst of a five-game homestand and have won two of three, making Thursday’s match against Detroit a crucial one for the Sharks to regain their Bay Area magic. Goalie Matt Jones’ struggles certainly aren’t helping after seeing his GAA balloon up to 3.68 over his last six starts.

But as mentioned earlier, the Red Wings are pretty bad at penalty killing right now, and the Sharks have been known to smell blood in the water when they have the upper hand. The team is currently fifth in the league overall in power play situations, and have 10 power play goals in their last seven games. San Jose should very well jump on any and all miscues coming from their match against the Red Wings.

The Sharks give their fans a rare chance to celebrate a victory at home, 3-1.