All is right in Green Bay once again as the Packers are now tied for the NFC North lead with the Detroit Lions after demolishing the Minnesota Vikings on Sunday. They can make it three wins on the trot when they face the Miami Dolphins who are desperate for a victory to further boost their AFC East title hopes.

Read on for a complete preview of this important showdown and while you’re at it, you can check out our preview of the Monday Night Football game between San Francisco and St. Louis.

Packer Nation can really now breathe a huge sigh of relief after Green Bay recorded its second win in succession against the Vikings on Sunday to put their Super Bowl title hopes back on track.

[sc:NFL240banner ]The Packers crushed the Vikings 42-10 to improve their season record to 3-2. Aaron Rodgers completed 12 of 17 passes for 156 yards and three touchdowns in a highly-efficient performance. However, it was the play of running back Eddie Lacy that will boost the spirits of Green Bay fans even further.

Lacy ran for a season-high 105 yards and two touchdowns. It was his first 100-rushing yard game of the season, a welcome development for Packer fans who have witnessed the 24-year-old struggle mightily in his first four games this year.

Through Green Bay’s first four assignments this season, Lacy racked up just 161 yards for a paltry 3.0 yard per carry average. Things were different for Lacy right from the get-go against the Vikings, though, running for 18 yards on the first carry of the Packers’ second series. He followed that up right on the very next play with a bursting 29-yard run. Those were his two longest runs of the season.

Green Bay, which led 28-0 at the halftime break, had a total of 156 rushing yards the entire contest. With Lacy now back to his old form, the Packers will now have a more balanced offensive attack heading into the middle part of the season.

Lacy will look to continue his renaissance this coming Sunday when he and the rest of the Packers travel to Miami to face the Dolphins. Miami are just 14th in rushing defense this season with opponents averaging 107.2 yards against them and this is a perfect opportunity for Lacy to pile up the numbers even further.

Green Bay are 3-2 in their last five away games. They are just 2-2-1 ATS however this season. 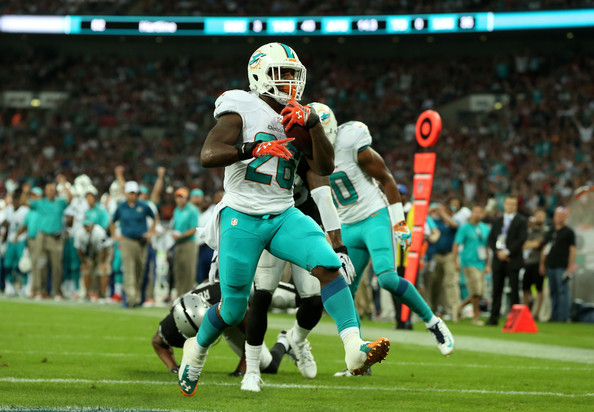 The Miami Dolphins got their season back on track with a comprehensive 38-14 win over the struggling Oakland Raiders in Week 4. Now coming off a bye week, they will look to sustain the momentum of that victory when they face the resurgent Green Bay Packers this coming Sunday.

Miami will once again rely on running back Lamar Miller who has been a surprise package for the Dolphins this season. He has stepped in admirably for RB Knowshon Moreno who is out with a dislocated elbow, averaging a productive 5.7 yards per carry this season.

In the game against the Raiders, he rushed for 64 yards on 12 carries with two touchdowns to boot as he now lies in 11th among running backs in with a 69.2 yards per game. In fact, thanks to his exploits, the Dolphins now own the fifth-best rushing offense in the league with Miami averaging 142.2 rushing yards through their four games.

The ground game is expected to be the main source of attack once again for the Miami offense in the game against the Packers, especially with Green Bay’s defense looking out of sorts this early in the season. The Packers are dead-last in the NFL in rushing defense with opponents averaging a whopping 163.0 rushing yards per contest against them.

A successful running game will do wonders for quarterback Ryan Tannehill as this will help open more possibilities for the Dolphins attack. Tannehill needs all the help he can get as he is just 22nd among starting quarterbacks in the passing yards department with a 225.5 average.

Through four games, he has completed just 93 of 155 passes for a measly 60 percent completion. Also, his passer rating of 81.2 is just good enough for 33rd among all quarterbacks.

The person that the Dolphins will be most wary of is Tannehill’s opposite number, Aaron Rodgers. After back-to-back strong performances, he now sits in 2nd behind Philip Rivers for the quarterback with the highest passer rating with a 114.8 mark.

The Dolphins, though, will be confident in handling the former Super Bowl winner. They are ninth-best in the NFL in passing defense with teams averaging just 215.0 passing yards against them this season. In fact, the Miami defense has been impressive on both the pass and the rush this year as they are seventh in the league in total defense with a 322.2 mark.

It will be fascinating to see how they will fare against a Packers offense that has averaged 40 points in their last two games.

The Dolphins are 3-2 ATS in their last five home games. They are also 2-2 ATS this season.

The Packers (-3.5) pull off a double-digit win on the road against the Dolphins.