John Isner and Matthew Ebden face each other in what should be a very explosive second round matchup. Isner is one of the most powerful players in the tournament, firing off more than 30 aces in just the first round alone. Ebden also happens to be a powerful player with a penchant for winning matches with his serve.

It will be raining aces in this big-time matchup. Read on as we take a look at the action to come. Looking to get more tennis action? Check out our complete previews for Novak Djokovic vs. Jarkko Nieminen and Kei Nishikori vs. Santiago Giraldo.

The Wimbledon greens are proving to be very conducive for John Isner’s power. The 6-foot-10 American fired off a whopping 38 aces and won 63 of his 68 serve points in dispatching Go Soeda 7-6(5), 6-4, 6-4 in the first round of the tournament.

But the American’s receiving game is a cause for worry against another powerful server in Matthew Ebden. Isner won just 26 of 91 of his return points in his first round match against Soeda. The last time Isner faced a competent player on serve, he lost in straight sets, 7-6(5), 6-3, to Viktor Troicki in the quarterfinal round of the AEGON Championships. 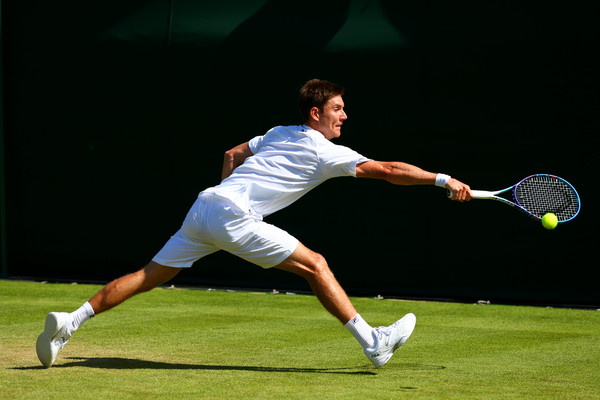 Matthew Ebden broke his streak of three straight first round exits at Wimbledon, beating Blaz Rola in straight sets (6-2, 6-1, 6-4) on Monday. The Australian was clinical in his dispatching of Rola, winning 76 percent of his serve points. He was also excellent on the return winning 45 percent of receiving points, including converting 5 of 13 break point attempts.

Ebden will need another all-around performance if he wants to get past the powerful American, Isner. He had some success in his only meeting against Isner winning 75 percent of his first serve points. He was very accurate, putting in play 40 of 57 of his first serves. Isner’s power hurt Ebden, though. The Australian won just 20 percent of return points against Isner and went 0 for 2 on break point opportunities.

Ebden should hold the edge when it comes to experience on grass. He’s spent a lot of time on grass ahead of the 2015 Wimbledon Championships, going 11-2 on such surfaces on the ATP Challenger Tour. He won the Surbiton Challenger title and finished runner-up in the Ilkley Challenger before playing in Wimbledon. The familiarity on grass should help Ebden keep this match tighter than it should be against the favored Isner.

Isner serves Ebden a healthy dose of aces for a four-set victory. Create a betting account now and fire off your own aces with the best odds and lines for your tennis action.