World No. 5 Kei Nishikori survived a nail-biting five-set encounter against Simone Bolelli in the first round of the 2015 Wimbledon Championships. While Nishikori is a world-class talent capable of giving the best players a run for their money, he’s currently bothered by a nagging calf injury. That should be sweet news to the ears of Santiago Giraldo, who’s looking for a repeat of last year’s third-round Wimbledon appearance.

Can Nishikori keep battling his injury concerns for a deep Wimbledon run? Or will Giraldo step up to the plate to score the upset? Read on as we break down this intriguing match.

There’s plenty more action in the Wimbledon Men’s Singles. Check out the complete previews for Novak Djokovic vs. Jarkko Nieminen and Grigor Dimitrov vs. Steve Johnson.

Kei Nishikori didn’t have the best of starts at the 2015 Wimbledon Championships, needing three and a half hours to dispatch Simone Bolelli in five sets. The Japanese ace put in just 59 percent of his first serves into play, but still ended up winning 74 percent of serve points. He also fired off 14 aces.

[sc:Other240banner ]Nishikori does the most of his damage with his serve, but he faces an intriguing stylistic matchup in return specialist Santiago Giraldo. Nishikori’s also a competent return player though; he won 37 percent of his receiving points and 5 of 12 break point opportunities against Bolelli.

Nishikori is also a mobile and agile player. He won 67 percent of net points against Bolelli. But the 25-year old’s mobility may be downplayed in this match considering his calf injury.

Nishikori has struggled at Wimbledon; his 57 percent win percentage at the major is his worst among all the Grand Slam events. But he’s done well on grass this season, winning four of five matches thus far.

Think the Japanese ace can overcome injuries to make a deep run at Wimbledon? Create a betting account now and make your pick. 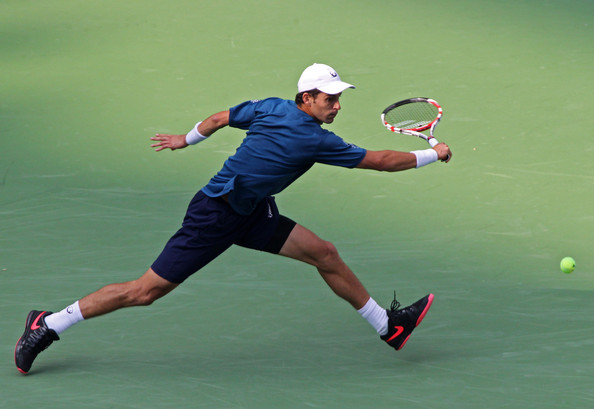 Santiago Giraldo is as fresh as he could be heading into the second round of the Wimbledon Championships. He needed just two hours to dispatch of Brazilian Joao Souza in straight sets. Giraldo showcased an all-around performance against Souza. He won 65 percent of his serve points and 47 percent of return points in the match, and also broke Souza on 6 of 14 break point opportunities.

Giraldo will be best served to dictate the pace of the match against a possibly one-legged Nishikori. He’s at his best with ground strokes and moving opponents around the court. Eight of Giraldo’s 18 winners came from ground strokes in his first round match against Souza.

The Colombian could also be effective with his approach shots to test Nishikori’s leg. Giraldo showed that he could nail opportunistic approach shots, winning 7 of 11 net points in the first round.

Giraldo has not made the third round in 10 of his last 11 Grand Slams.