Last year’s surprise Wimbledon semifinalist Grigor Dimitrov has struggled for most of the year, making fourth and first round exits at the Australian and French Opens respectively. But he seems to be in fine form at the All England Club after a straight sets victory in the first round. Dimitrov has quite a challenge ahead of him, though. He faces the powerful Steve Johnson in the second round of the Wimbledon Championships.

Which of these two young hot shots takes one more step toward the coveted prize? Read on as we break down this intriguing matchup. Care for more Wimbledon action? Check out our complete previews for Kei Nishikori vs. Santiago Giraldo and John Isner vs. Matthew Ebden.

Grigor Dimitrov wasted no time in dispatching Federico Delbonis in the first round of Wimbledon, winning 6-3, 6-0, 6-4 in just under an hour and a half. Dimitrov wasn’t able to bring his best in that match, putting just 53 percent of his first serves in.

[sc:Other240banner ]But when Dimitrov got playing, he was difficult to stop. He won 84 percent of his serve points in the straight-sets victory against Delbonis. Dimitrov was also sharp on the return, winning 48 percent of receiving points and won 5 of 13 break point opportunities.

Dimitrov has struggled against powerful opponents recently, dropping matches to Jack Sock (French Open) and Gilles Muller (AEGON Championships). To add, the defeat to Muller happened on grass. Dimitrov won just 20 percent of his return points and allowed Muller to fire off 19 aces. The Bulgarian may be in trouble if he can’t slow down the powerful Steve Johnson, who fired off 33 aces in the first round.

But Dimitrov may benefit from more stamina heading into this match. Johnson played five gruelling sets in the first round of Wimbledon compared to just three short sets for Dimitrov. 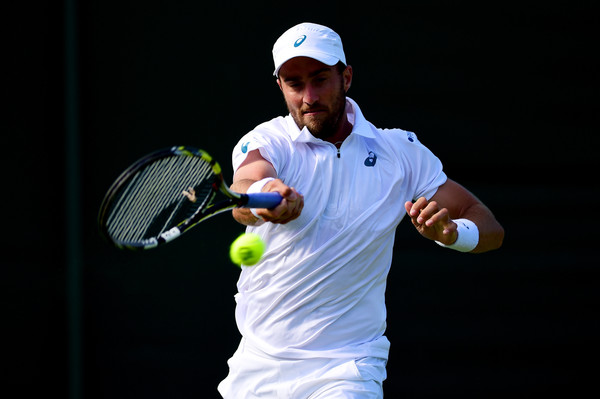 Steve Johnson is having the best year of his life when in terms of Grand Slam performances. He’s reached the third round in the Australian and French Opens — the first time he’s gone that far in more than one Grand Slam in a season. Johnson also reached the second round of the Wimbledon Championships for the first time of his career this year after beating Lukas Lacko 6-3, 6-7(5), 4-6, 6-1, 6-1 on Monday.

Showcasing his power will be very important ahead of this match, as Dimitrov has shown some holes against powerful service players recently. Johnson will also benefit if he can dominate the match early. There’s a chance that he may fade in the latter sets of the match after clocking a little less than three hours in the first round.

But Johnson did show great resolve in the first round, and he may have even played better in the latter two sets of his match against Lacko. The American won over 91 and 93 percent of his first serve points in the fourth and fifth sets of his first round match respectively.

Johnson will have a greater chance for the upset if he can break Dimitrov’s serve. He won 4 of 11 break point opportunities in his first round match. Johnson may also be able to contend with Dimitrov’s serve, winning 34 percent of return points in the first round.

Johnson has won five of his last seven Grand Slam matches this year.

Dimitrov advances to the third round with a four-set victory over Johnson. Don’t miss out on the sparkling tennis action at the All England Club. Create a betting account now and get into the big-time tennis action to come.