The Kansas City Chiefs are right back at .500 after they thoroughly dismantled the New England Patriots under the bright lights of Monday Night Football to claim their second straight win. Quarterback Alex Smith and the Chiefs will go in search of a third win in a row against Smith’s old team, the San Francisco 49ers, who are also keen to get back above .500 after an uneven start to their season.

Elsewhere, Minnesota Vikings wideout Greg Jennings meets up with his former team, the Green Bay Packers, for an NFC North showdown this week. Check out our preview of the Vikings vs. Packers, and read on to see if Smith comes back to haunt the Niners.

The Kansas City Chiefs are sure enjoying their role as the plucky underdogs. After covering as road underdogs at Denver and at Miami, the Chiefs delivered a comprehensive 41-14 beatdown on the Patriots as three-point home dogs. The Chiefs are now 3-1 against the spread this season, and will be underdogs for a fourth-straight game when they travel to San Francisco.

[sc:NFL240banner ]But after such an impressive win against the Pats, it’s probably time to take the Chiefs very seriously. Head coach Andy Reid constructed a highly efficient offense around not one, but two very talented backs. Jamaal Charles returned from injury to score three touchdowns as he and Knile Davis formed a two-headed monster that devoured the Pats for 207 rushing yards.

Quarterback Alex Smith was also terrific, completing 20 of 26 passes for 248 yards and three touchdowns, two to Charles. In the last two weeks, Smith has completed over 76 percent of his passes for six touchdowns, and is looking every bit like the quarterback that took the 49ers to within just one win of the Super Bowl in 2011. The Chiefs will need a similarly great outing out of their quarterback to take out his old team on the road.

The Chiefs could also use more of the same brand of defense they played against the Pats. Pass rusher Justin Houston accounted for two of the team’s three sacks, including one that caused a Tom Brady fumble, while the secondary picked Brady off twice, one of which was taken to the house for a touchdown. Those three turnovers were their first ones this season.

Kansas City’s defensive backs will be on the lookout for any errand throws from Colin Kaepernick, who has four interceptions in the first four games. 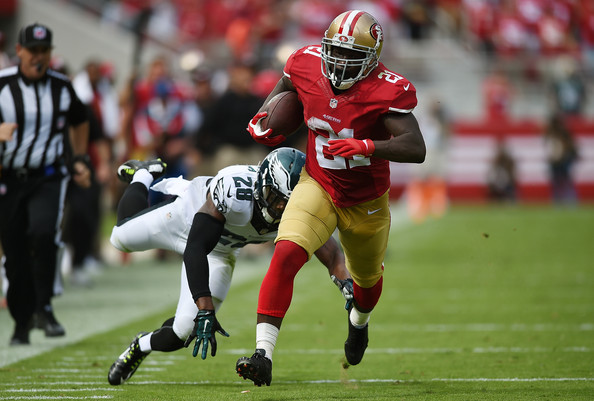 Against the Philadelphia Eagles last Sunday, the San Francisco 49ers finally played their trademark game of hard running and lockdown defense that’s brought them so much success over the last four years under head coach Jim Harbaugh. As a result, they came away with a hard-fought 25-21 home win over the previously unbeaten Eagles.

After abandoning the run against the Cardinals last week, the Niners ran the ball down the Eagles defense’s throat 42 times for 218 yards, with workhorse back Frank Gore accounting for 119 yards on 24 carries. The Niners defense also dealt the free-scoring Eagles offense to their worst game of the season, holding it scoreless on just 213 total yards.

As a result of the running game and defense playing well, the Niners controlled possession for over 42 minutes. Those two aspects of San Francisco’s game will once again be key in taking down the dangerous Chiefs.

The Niners will face the Chiefs’ backfield duo of Charles and Davis, who ran the Patriots’ defense ragged on Monday Night. But the Niners rank second with 70 rushing yards allowed per game and held the explosive LeSean McCoy and Darren Sproles in the Eagles running game to just 22 rushing yards on 12 carries.

And should the Niners continue to commit to the run, they should be able to move the ball well against the Chiefs’ run defense. Despite Kansas City holding the Pats to 75 rushing yards, New England helped them out by failing to establish the run. In the two games previous, the Chiefs allowed 162 and 141 rushing yards to the Titans and Dolphins.

The 49ers slow down the Chiefs running game while Gore has another big gain on the ground to spoil Smith’s return to San Fran. Take the Niners to win and cover at home. Create a betting account now and cash in on all the awesome NFL action!