The quarterfinal field of the 2014 U.S. Open Men’s Singles tournament is finally complete with Marin Cilic and Tomas Berdych recording contrasting victories yesterday to seal their places in the last eight. Cilic had to go the distance before defeating Gilles Simon in an epic five-setter while Berdych had a much easier passage, breezing past Dominic Thiem in straight sets.

Can Berdych continue his good form and reach his second Grand Slam semifinal of the year? Or will Cilic still have enough gas in the tank to outlast the Czech star? Read on for our analysis of this intriguing matchup and while you’re at it, check out our preview of the round’s biggest match: Novak Djokovic vs. Andy Murray.

He may be tired but Marin Cilic will be entering his match with Tomas Berdych with extreme confidence after finally getting the better of Gilles Simon in the fourth round of the U.S. Open. Cilic notched his first win in five meetings with Simon by hacking out a tough 5-7, 7-6 (3), 6-4, 3-6, 6-3 victory in hot and humid conditions.

[sc:Other240banner ]Cilic had his best serves of the tournament going in the round of 16, blasting 23 service aces against the Frenchman. He also won 81 percent of his first serve points and had 70 winners the entire match.

His current form is not a surprise, though, as Cilic is playing some of the best tennis of his life. Now coached by tennis great Goran Ivanisevic, he has compiled an impressive 44-16 record this season. He has won eight of his last ten singles matches and his only two defeats during that span came from fellow U.S. Open quarterfinalists Roger Federer and Stan Wawrinka.

This is Cilic’s second consecutive Grand Slam quarterfinal after barging into the last eight of Wimbledon last July. He will look to go one further and reach his first-ever U.S. Open semifinal with a win over Berdych on Thursday.

Although Berdych is the higher-ranked player, Cilic will be confident of his chances as he beat the Czech star in their last meeting at Wimbledon just this year winning in straight sets, 7-6(5), 6-4, 7-6(6).

Create a betting account now and cash in on all the exciting tennis action. 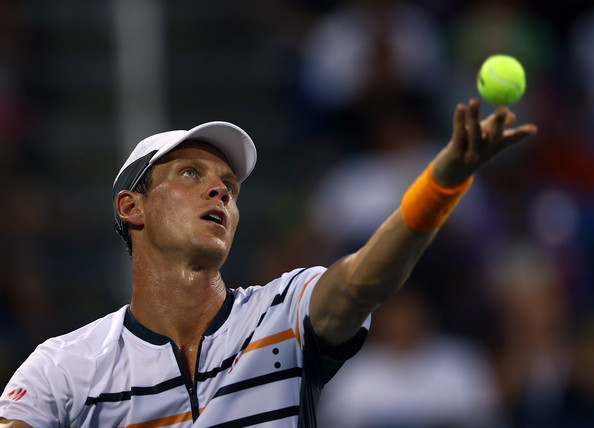 After surviving a mighty scare in the second round against Martin Klizan, Tomas Berdych looks to be right back on track as he demolished Dominic Thiem in the fourth round of the U.S. Open.

Berdych simply outclassed the 20-year-old youngster, winning 6-1, 6-2, 6-4 in a match that lasted only 98 minutes. The Czech star had 10 aces and 24 winners in the match as he won a commanding 85 percent of his first serve points.

Berdych’s serve has been his primary weapon this whole tournament and he needs to be right on target when he faces the dangerous Cilic next. He will be confident heading into his match against Cilic, though, as he holds a 5-3 edge against the Croatian in their eight career meetings so far.

Their last meeting at a hard court came at the Rotterdam final just this year with Berdych emerging victorious in straight sets, 6-4, 6-2. In fact, Berdych is 3-1 in four career hard court meetings with Cilic.

A victory over Cilic on Thursday will send Berdych to his second U.S. Open semifinal in three years.

Berdych’s experience will prove to be the difference in another close encounter.