Brad Keselowski is on fire. The Team Penske driver has reeled off back-to-back wins, and is looking to complete his hat-trick of wins at the 2016 NASCAR Sprint Cup Series’ next stop in New Hampshire. However, he won’t be short of competitors who will be lining up to bring him back down to earth.

Here are some of the top drivers to keep an eye on in the 2016 New Hampshire 301. Meanwhile, check out three more under-the-radar sleeper picks for next weekend’s race here.

On recent form alone, Keselowski would justifiably be the big favorite in New Hampshire. The No. 2 has now won back-to-back races after another win in Kentucky last week. He’s up to second in the Sprint Cup standings, just four points off leader Kevin Harvick.

But add Brad’s track record of success in New Hampshire Motor Speedway, and the Team Penske driver’s case of completing his hat-trick of wins gets much stronger. Keselowski’s finished in the top 7 in seven of his last nine starts at the track, including two runner-up finishes and a win in 2014.

The Kyle Busch winning drought continues. The reigning Sprint Cup champ has now failed to win in his last seven races after another disappointing 12th-place finish last weekend in Kentucky. However, this race in New Hampshire could finally be the race when Busch bounces back and returns to Victory Lane.

Kyle has been close to unstoppable on this track in recent races. He’s finished in the top two spots in four of his last six races in New Hampshire, including a win in this very race last year. His team in Joe Gibbs Racing will have to shake out of its poor stretch in recent weeks, but if it does, look for Busch to return to contention this weekend. 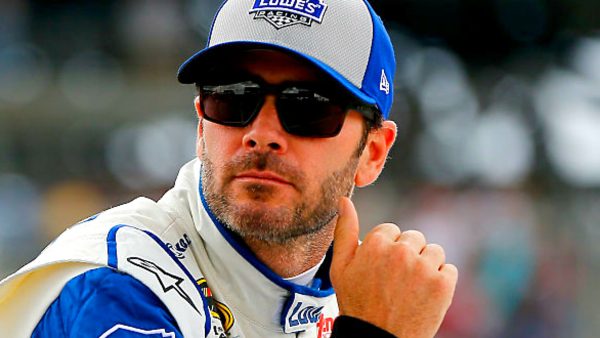 It’s been a rough last couple of races for Jimmie Johnson. The six-time Sprint Cup champion crashed early last week in Kentucky, and has now failed to crack even the top 30 in each of his last two races. But don’t dare underestimate No. 48, especially in New Hampshire.

Johnson has three career wins at the track, and has finished in the top seven in six of his last eight starts. With that type of track record, don’t be surprised to see Johnson climb back to the shortlist of top contenders in Loudon.

Carl Edwards has never won in his career in New Hampshire, but don’t sleep on him and his chances of finally coming away victorious this weekend. Edwards grabbed pole in not just one, but both races at the track last year, and finished in the top seven in both races as well. He’s also been driving pretty well of late, with two top-five finishes in his last three races. That includes last week’s runner-up performance in Kentucky.

Ryan Blaney doesn’t have nearly the experience that the other top drivers have at this track. The rookie has only competed in just one Sprint Cup Series race in New Hampshire to date, but he did have quite a strong showing in that race. He was running all the way up in seventh until he suffered a loose wheel and eventually dropped down to 16th. It’s quite a long shot, but Blaney could be a good bet to get his first-ever Sprint Cup win in Loudon.

Kyle Busch regains his mojo as he outduels Keselowski to get his fourth win of the season.