The New York Islanders and the Florida Panthers are both looking for a good end an otherwise disappointing month of November. The Islanders are 5-11 thus far this month, while the Panthers are at even worse shape with a 3-4-3 record. Later tonight, the Islanders look to move further away from a recent two-game skid, when they pay Florida a visit. The Panthers, on the other hand, will try to end a four-game homestand with a victory before packing their bags for a five-game road trip.

Read on for more about this matchup. You can also check out our preview of Blackhawks vs. Ducks.

[sc:NHL240 ]After losing back-to-back games to Montreal, the Islanders got back in the win column when they defeated rival Philadelphia on Wednesday, 3-1. It was a much better defensive performance for the Isles, who allowed nine goals in their consecutive losses to the Habs.

Jaroslav Halak stopped 17 of the Flyers’ 18 shots, a relatively lighter workload for him, thanks in large part to the terrific job of New York’s blueline. It was the fewest number of shots an opponent has attempted against the Islanders since October 31, when New Jersey had only had 17, albeit in a 3-2 shootout loss.

Halak is in line to start again later tonight against the Panthers, and he’ll be looking to continue rolling. The Czech netminder has won two of his last three starts after picking up three-straight setbacks. Thus far this season, Halak is 5-4-1 with a 2.13 GAA and .913 SV%.

The Islanders’ power play, meanwhile, is currently searching for answers after another unproductive night. By going 0-for-2 on the man advantage against the Flyers, New York now has failed to score a power play in its last 10 opportunities. The Islanders hope to end that drought later tonight against Florida’s penalty kill that ranks just 25th in the NHL. 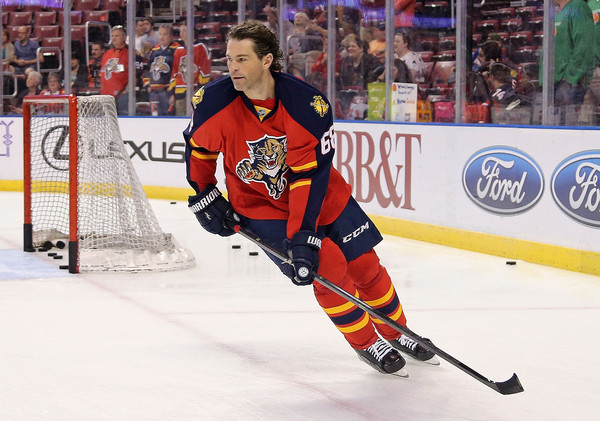 While it’s fun to see ageless wonder Jaromir Jagr continue to score goals, there’s something wrong on a team’s offense when its leading scorer is a 43-year-old 21-year veteran. Up against a high-scoring team in the form of the Islanders, Florida needs some of its top (and younger) gunners to come out of Jagr’s shadow and contribute. Jagr paces the team in goals and points with eight and 17, respectively.

That said, the Panthers do have talented wingers to rely on in their offense, which averages 2.6 goals per game. The question is when Jagr and the likes of Jussi Jokinen, Aaron Ekblad, and Nick Bjugstad would get it all together at the same time.

Take for example the Panthers 5-4 overtime loss to New York on Saturday, when they got balanced production from their top players. Unfortunately for Florida, Roberto Luongo had a bad night, albeit against a tough Rangers side, allowing all five New York goals on 31 shots faced.

The Panthers could find success on the man advantage later tonight against the Isles, though. Florida is fifth in the league with a 22.1 PP%. New York is ranked 11th in stuffing power plays thus far this season, but its special teams appear to be losing its edge of late. The Islanders have allowed at least a power play goal in five of their last six games.

Speaking of Luongo, the netminder remains as one of the league’s most reliable between the pipes. Luongo positions himself in front of the net later tonight carrying a 6-8-3 record with a 2.49 GAA and .922 SV%.

Florida is 6-4 in its last 10 home games against the Islanders.