Despite the popular belief that the Green Bay Packers are a lock to win their division with ease this 2017, the Minnesota Vikings, Detroit Lions and to an extent the Chicago Bears still make for three NFC North teams that can really give the Packers a run for their money.

Here’s how we’ve predicted each team from the longest-tenured division in the NFL will finish in the upcoming regular season.

For as long as Aaron Rodgers is at the helm of the offense, Green Bay is in very good hands. While the team still has some holes on defense left unattended during the offseason, its offense is once again well-equipped to carry the team to another inevitable postseason appearance, especially with the addition of tight end Martellus Bennett and wideout Jordy Nelson back into his prolific form.

The Packers’ roughest stretch of the season is actually during the first couple of weeks; they’ll host the Seahawks on Opening Week before heading out to Atlanta for an NFC title game rematch against the Falcons. But from there on out, the schedule gets much easier, with meetings against the Cowboys and Steelers as the only real road blocks.

Writer’s Prediction: A 12-win season for the Packers is highly realistic, so taking the OVER would be a wise choice.

Detroit’s clutch factor somehow vaulted the team into the playoffs as a wild card, but winning a bunch of close games will never translate to a division title at that.

The Lions boast a pass-happy offense led by Matthew Stafford, but their reluctance to take riskier shots downfield means that their ground game must come alive. Running back Ameer Abdullah needs to bounce back from the multitude of injuries he’s faced since joining the team in 2015, as the Lions need to chew up more game clock to make up for their rather porous defense.

Writer’s Prediction: Detroit has gone 7-9 in two of the last four seasons (both during odd-number years), leaving us more inclined to side with the UNDER. 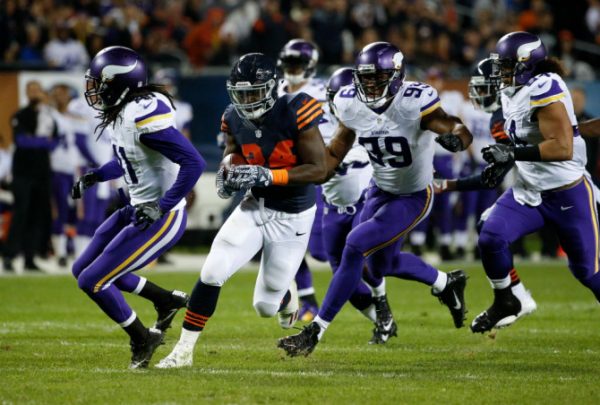 A young and imposing defensive unit had the Vikings off to a torrid five-game win streak to start the previous season. However and much like the Lions, their running game was nowhere to be found because of an atrocious offensive line, eventually having them sputter to a disappointing .500 record.

On the bright side, Minny’s only significant loss in the offseason was the departure of franchise legend Adrian Peterson, whose production from the backfield is questionable at best given his current age. Signing Latavius Murray and drafting FSU’s Dalvin Cook more than makes up for the loss of AP, and the additions of Riley Reiff and Mike Remmers in the O-line further complement their offensive overhaul. These moves, in turn, give the Vikes a decent chance of being a true challenger to the Packers’ claim of the North.

Writer’s Prediction: A one-win improvement for the Vikes is highly plausible. Taking the OVER should be a sound call.

Chicago’s Draft Day blunders pretty much signalled that the team won’t be seriously contending for a playoff spot just yet, let alone the division crown. Not unless Mitchell Trubisky proves his doubters wrong by having a banner rookie season, that is. Even then, the Bears’ other two QBs on the roster in Mike Glennon and Mark Sanchez aren’t exactly suitable mentors to groom Trubisky for the starting job.

Running back Jordan Howard seems like the only guarantee to have a great season for the Bears. However, opposing teams can easily focus on containing Howard. That leaves either Glennon, Trubisky and Sanchez with the tough task of exceeding each of their expectations in the passing game, and the thought of that ought to incite plenty of groans from the Windy City faithful throughout the season.

Writer’s Prediction: Granted how coming away with wins in at least half of their divisional matchups is a tall order in and of itself, bank on the Bears to finish well UNDER the 5.5 line.

Create a betting account now to start placing stakes on some NFL futures before the regular season officially kicks off this fall!