The age-old adage of “three’s a crowd” has been the AFC North’s calling for quite some time now. Over the past decade, the Pittsburgh Steelers have won four division titles (their latest coming just from the previous season), while the Cincinnati Bengals and Baltimore Ravens have held the division crown for three seasons apiece.

Entering the new season, it seems that none of these three teams can easily be considered as the clear-cut favorite to win the North once again. Oh, and we almost forgot: the Cleveland Browns are also in the mix. This should be great news for football fans looking forward to another hotly-contested regular season in the one of NFL’s most unpredictable and talent-heavy divisions.

Read on as we tackle the probable win total for each AFC North team judging on how much or how little they have done during the offseason. And don’t forget to check out our other win total previews over in the AFC East and the NFC North just as well.

The Pittsburgh Steelers are in good position to defend their division title once more, primarily because they have two-time Super Bowl champ Ben Roethlisberger leading the offense together with an intimidating group of wideouts at his disposal. Top-5 receiver Antonio Brown will look to have another monster season, as well as his fellow receivers Martavis Bryant and Markus Wheaton.

[sc:NFL240banner ]Pittsburgh must avoid being fazed by the absence of running back Le’Veon Bell for its first three games due to a suspension. Luckily for them, their Week 1 opener against the New England Patriots will be a Brady-less affair due to the New England quarterback’s own four-game suspension from the Deflategate scandal.

What the Steelers must worry about is how their defense will adjust to all the sudden changes in their roster. After losing critical pieces on D due to retirements – from the expected (Troy Polamalu) to the unexpected (Jason Worilds) – Pittsburgh has now transitioned from being the Iron Curtain defensive mastermind into an offense-first team. They even lost highly touted defensive coordinator Dick LeBeau, who was replaced by Keith Butler.

Butler must already have Pittsburgh’s defense in sync and geared up towards the end of the season. Here’s how the Steelers’ bloody stretch between weeks 12 to 16 looks like: at Seattle, home against Indianapolis, at Cincinnati, back to Heinz Field for Denver, and then at Baltimore.

But if these late games against formidable postseason teams from last season put their playoff hopes in Jeopardy, the Steelers can still take solace in the knowledge that their final game will be played at Cleveland. That, and the fact that their potent offense – which ranked second only to Green Bay last season as per DVOA – will look to terrify the AFC North and the rest of the league.

As long as we’re not on the topic of the NFL’s postseason just yet, the Cincinnati Bengals will always be in the discussion of notable contenders, as this team always has a great shot at a division title or a wild card spot. The Bengals are a top-flight team during the regular season, winning no less than nine games in each of the past four seasons and have made the postseason in all of them.

This season will probably pan out nicely for Cincinnati just as well, as they’ve pretty much kept the same roster from last year intact. Andy Dalton will likely see a surge in his numbers, as most of his main targets in the passing game are in contract years and are poised to put up huge stats to pad their respective values heading into next year’s free agency. The defense also got a solid addition to their starting lineup by acquiring linebacker A.J. Hawk from the Packers.

The toughest challenge that the Bengals must overcome will be in Weeks 15 and 16, where they’ll have back-to-back primetime road games against the 49ers in Santa Clara and the Broncos at Mile High. This pair of road games could possibly make or break Cincinnati’s bid at a playoff berth, as the Bengals turn back into the “Bungles” in such situations. They are just 1-12 since 2005 in away games played at night.

If the Bengals reel off wins from the matchups that they’re expected to win early on in the season, then another wild card appearance is not far from their grasp. The first three weeks against the Giants, Bucs and Bears should get their season off to a good start, with their first true trial still coming in Week 4 against Andrew Luck and the Colts.

Create a betting account now to get in on all the NFL futures action. 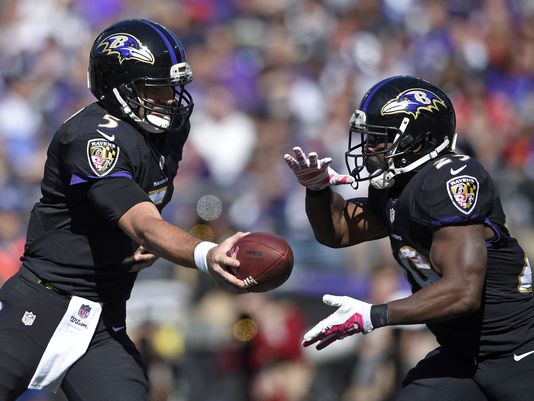 Just like the Bengals, the Baltimore Ravens can never be counted out during the regular season (albeit with more success during the postseason, but that’s another story to be told at a different time).

Head coach John Harbaugh has definitely molded the franchise into a perennial contender. During his seven-year stint with the team, the Ravens have only missed the playoffs once with an 8-8 record during the 2013 season.

What’s got to be of concern for Baltimore is how their offense will perform this season. Joe Flacco no longer has Torrey Smith and Jacoby Jones at the wings of the passing game, and is also without Ray Rice on the ground. Instead, high-upside draft picks in wide receiver Breshad Perriman and tight end Maxx Williams must get the new look Ravens offense off on the right foot. Justin Forsett must also prove his incredible 1,000-yard 2014 season was no fluke.

The defense also took a hit when Baltimore lost one of its franchise’s best players in Haloti Ngata who is now playing for the Detroit Lions. With the Steelers and Bengals looking to take to the air and eat up huge distances on the field, the Ravens defense must flex their imposing muscles now more than ever and as they are wont to do year-in and year-out.

The two-game road trip out West against Denver and Oakland to start the season does not do Baltimore any favors. In fact, five of their first seven games will be played on the road. With the competitive NFC West and a well-rounded AFC West on tap – not to mention the AFC North itself – this season is shaping up to be the toughest season yet in the Harbaugh era.

With all the talk of the Steelers, Bengals and Ravens jockeying for the title of King of the AFC North, it’s easy to forget that the Cleveland Browns also reside in this division.

This season should be no different, as the Browns have yet to figure out how to create and run an offense capable of threatening any opposition. The quarterback situation is still a mess; picking between Josh McCown or Johnny Manziel as your starter is just torturous labor for head coach Mike Pettine. Having a receiving corps of Dwayne Bowe, Brian Hartline and Andrew Hawkings also doesn’t do Cleveland any favors.

If anything, the Browns still have a solid defense going for them. They had the eighth-best weighted defensive efficiency last season via DVOA, and are still headed by two-time Pro Bowl cornerback Joe Haden.

And yet, there are still too many “ifs” in order for the Browns to make a splash in the league, let alone in their own division. If the offense makes a huge stride with the current roster that they have, and if the defense can contain the gunslingers of the AFC North, then a wild card berth may just be within reach. But as it stands right now, topping or equaling Cleveland’s seven-win output from last season seems like a long shot.

The Steelers win the division with a 10-6 record, narrowly beating out the Bengals who have the same record but still qualify as a wild card entry for the playoffs. The Ravens end with a 9-7 record and miss out on the postseason, while the Browns regress this year with a 4-12 record.