No. 1 Arizona vs. No. 2 Wisconsin – March Madness Elite 8 – Betting Preview and Prediction

No. 1 Arizona and No. 2 Wisconsin proved to be the best of the West region of the March Madness bracket this year, the only No. 1 vs. No. 2 match-up in this year’s Elite Eight. The Wildcats elite defense stymied San Diego State, while the Badgers’ efficient offense eradicated a suddenly ice cold Baylor. With a trip to the Final Four up for grabs, it’s defense vs. offense in this heavyweight college basketball tilt.

For everything you need to bet this intriguing Elite Eight NCAA Tournament match up, read on.

Betting on the Arizona Wildcats

Despite leading scorer Nick Johnson going scoreless in the first half, the No. 1 Arizona Wildcats overcame the challenge of No. 4 San Diego State 70-64 to reach yet another Elite Eight. Johnson eventually woke up to score all of his 15 points with just three minutes left, while star freshmen Aaron Gordon and Rondae Hollis-Jefferson continued their tremendous tournaments with 15 points each.

The Arizona offense shot 48% from the field against a formidable Aztec defense to maintain its shooting efficiency in the tournament. If the Wildcats can keep up with the Badgers offensively, they stand a great chance of winning.

But even if they don’t score as well, their great defense can still see them through. Kaleb Tarczewski and Aaron Gordon have the size and the versatility to keep Wisconsin’s Frank Kaminsky in check. And with other outstanding defenders across the court, the Badgers will find few advantages on offense.

Betting on the Wisconsin Badgers 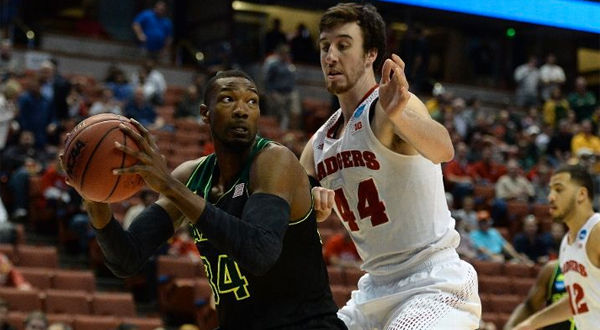 No. 2 Wisconsin put on an offensive basketball clinic en route to its 69-52 demolition of No. 6 Baylor in their Sweet 16 game on Thursday night. The Badgers dissected the Bears’ zone defense that held the great Creighton offense to just 40% with precise passing – they assisted on 11 of their first 13 baskets – and sizzling shooting (52% on the night).

On the other end, the Badgers limited the explosive Baylor offense that shot 64% and hit 11 threes vs. Creighton to an abysmal 31% from the field and 2-15 from downtown. They also outrebounded one of the best rebounding teams in the nation to compound the domination.

Wisconsin can boast a considerable amount of offensive talent – six players averaged eight points or more this year. That depth, balance and offensive variety should keep even the great Arizona defense off-balance. And when all else fails, 7-0 center Frank Kaminsky (19 points in two straight games) has proven that he can put the team on his shoulders.

In a battle of offense vs. defense, lean toward the defense. Arizona has proven throughout the year and in the tournament that’s one of the very best defenses left standing. A bounce-back game from Johnson should give the Wildcats the added offense it needs to advance to the Final Four.