The Cleveland Browns gave the Jacksonville Jaguars their first win of the season in Week 7, a brutal let down for a team that has shown signs of competitiveness this season. Come Sunday, they’ll have to fend off another hungry and winless team in the Oakland Raiders. Will the Raiders finally get their first win of the season at the expense of the Cleveland Browns? Read on as we give you everything you’ll need to know heading into this game.

Want more games to satisfy your football frenzy? Check out our complete picks and predictions for Week 8 of the 2014 NFL season, as well as the explosive Sunday Night Football game between the Green Bay Packers and the New Orleans Saints.

The Oakland Raiders are having their worst start to a season since losing 13-straight in 1962. The Raiders’ 24-13 loss to the Arizona Cardinals brought them to a 0-6 start this year.

[sc:NFL240banner ]Rookie quarterback Derek Carr struggled to make big plays like he did against the Chargers. He completed 16 of 28 passes for 173 yards. Still, he managed to lead the Raiders to their lone touchdown in the contest, making a 55-yard deep pass to Brice Butler which setup Darren McFadden’s one-yard scoring run in the second quarter.

On the other side of the ball, the Raiders only have six sacks in the season (second-worst in the league). However, their pass rush may see an upswing especially with Cleveland center Alex Mack injured. Mack was a critical element of a Browns’ o-line that had been getting results with him in the lineup. Without Mack, the Browns may not have the power to exploit the Raiders run defense, which has allowed an average of 145.3 yards per game throughout their first six games.

The Raiders have covered the spread in their two road games this season.

Create a betting account now and win big on this week’s NFL action. 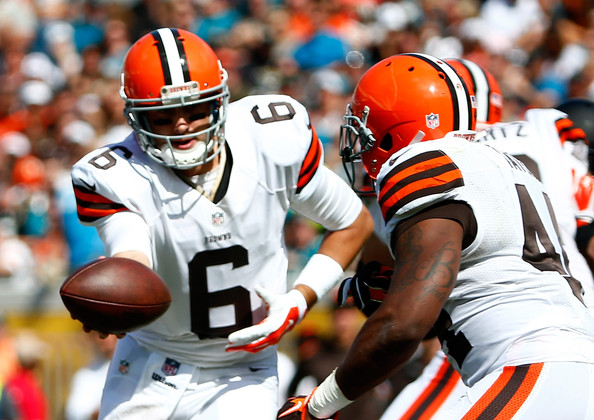 The Cleveland Browns found themselves down 10-6 entering the fourth quarter against the Jacksonville Jaguars. There was no comeback on their agenda this time as they lost 24-6 against the then-winless Jaguars Sunday. The loss dropped the Browns to 5-12 against AFC teams since 2013.

The Browns faced 10 third-and-longs, and they gained one yard or less on 65 percent of their plays. Quarterback Brian Hoyer was uncomfortable in the pocket with Mack injured. He had no effective play-action to use as he completed 16 of 41 passes for 215 yards and an interception. Hoyer was also out of sync with wide receiver Miles Austin, connecting just three times on eight targets for 53 yards.

Still, Hoyer may find it more manageable to connect with his receivers against Oakland. The Raiders allow opposing quarterbacks to complete 70.3 percent of passes. However, they’ll also need to get their running game going if they’re to have success in this game.

The struggle in the offensive line also stalled the Browns vaunted running game. Running back Ben Tate was held to 36 yards on 16 carries, while Isaiah Crowell managed only 18 yards on seven attempts. Still, they should be able to find the gaps in the Raiders’ defensive line, which allows four yards per carry.

On the other side of the ball, free safety Tashaun Gipson had two interceptions, while cornerback Buster Skrine had one. The Raiders’ secondary should be able to pick off Oakland’s rookie QB, especially if Carr decides to become too adventurous with his passes.

The total has gone over in four of the Browns’ last five home games.

The Browns’ offensive line continues to struggle, giving the Raiders plenty of opportunities to keep this game close. Take the Raiders to cover +7.