There will be no 0-16 season this year as the Oakland Raiders finally grabbed a victory Thursday in a shocking upset over the Kansas City Chiefs. They will look to sustain the momentum of that huge win when they face the St. Louis Rams in St. Louis.

Can the Raiders pull off another shocker? Or will the Rams send them crashing back to earth? Read on for a complete preview of this matchup and while you’re at it, you can check out our preview of the Thursday Night Football game between the Seattle Seahawks and the San Francisco 49ers here.

We seriously thought this day would never come, but we finally live in a world where the Oakland Raiders have a win. The Raiders pulled off the upset of the season as they stunned the AFC West-leading Kansas City Chiefs 24-20 to snap their 16-game losing streak.

[sc:NFL240banner ]That streak spanned two seasons and more than a calendar year (368 days to be exact). And it so easily could have been another heartbreaking defeat, if not for Derek Carr, who engineered the game-winning drive for the Raiders.

Trailing 20-17, Carr played like a veteran in the final minutes as he manufactured a 17-play, 80-yard drive that culminated in wide receiver James Jones’ game-winning nine-yard score with 1:42 left in the game clock. That was the sixth touchdown pass for Carr this season in the final two minutes but this was no doubt the biggest of them all.

The Raiders will now take their giant-killing ways to St. Louis where they’ll look to grab their first back-to-back wins since beating the Jaguars and the Chiefs in succession back in October 2012. If they are to pull that feat, though, they will need Carr to replicate his performance against the Chiefs.

Carr completed 18 of 35 passes for 174 yards and a touchdown in the win against the Chiefs. It wasn’t only Carr who stood out, though, in the shock victory. There was also Latavius Murray who ran for 112 yards and two touchdowns on just four carries to give the Raiders an early 14-0 lead.

Murray’s status for the game against the Rams this coming Sunday remains uncertain, though, after suffering a concussion against the Chiefs. If he manages to play, he will definitely be a thorn to the Rams’ defensive line that has allowed 10 rushing touchdowns this season, the seventh-worst mark in the NFL this year.

The Raiders are 4-1 ATS on the road this season. 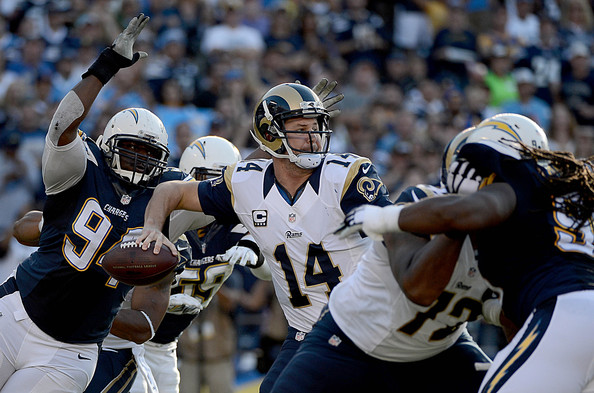 It was heartbreak all over again for the St. Louis Rams as they lost 27-24 to the San Diego Chargers in gut-wrenching fashion Sunday. The Rams came within yards of making it back-to-back victories for the first time this season but Shaun Hill’s pass was intercepted at the goal line with 56 seconds remaining to thwart St. Louis’ late-game rally.

Making big mistakes at critical junctures of the game has been the Achilles heel of the Rams this season. Hill’s late pick was the Rams’ NFL-leading fifth interception this season when trailing in the fourth quarter by seven or fewer points, three more than any other team in the NFL.

He also had a fumble in the third quarter which was returned by Andrew Gachkar for a 13-yard Chargers touchdown. That was the seventh defensive touchdown allowed by the Rams this season which is two more than any other team in the league this year.

Fortunately for the Rams, their next opponents are not known to be defensive artists. The Raiders have only intercepted five passes this season which is fourth-worst in the NFL. It doesn’t help that the Rams also have no defensive touchdowns this season.

Also working in the Rams’ favor is that they are set to return to the friendly confines of Edward Jones Dome. They have scored two major upsets in their last two outings there, defeating last year’s Super Bowl finalists Seattle and Denver, 28-26 and 22-7, respectively.

That last home performance was pretty special as they limited the great Peyton Manning and the Denver Broncos to single-digit points, the first time that has happened since Super Bowl XLVIII. They were able to do that by applying constant pressure on Manning who was sacked twice during the game.

The Rams are 2-3 ATS at home this season.

The Rams beat the Raiders but Oakland (+7) covers.