For the first time since his departure in 2012, Peyton Manning returns to his old stomping ground in Indianapolis to face his former teammates, his former employers and his replacement, Andrew Luck.

Peyton Manning or Andrew Luck: Who will achieve more success throughout his NFL career?

Outspoken Colts owner Jim Irsay has revealed that Manning had a hand in picking his heir apparent, saying that the Colts would be “crazy” to pass up on Luck. The young Colt has so far proven his predecessor right on his assessment, and has seamlessly led the organization back to peak-Manning success.

However, can Luck end up possibly even exceeding the Great Peyton Manning when all is said and done?

By any objective or statistical measure, Peyton is one of, if not the best modern-day quarterback in NFL history.

But wait, he’s not done quite yet.

Manning at age 38 is improbably on his way to having the best statistical season of his career, making him the front-runner for league MVP. Should he win, it would be the fifth MVP award of his career; only Favre has won more than two. And considering he could still perform like an MVP in his advanced age, there’s no reason to think he can play on past his 40th birthday.[sc:MLB240banner ]

Manning has been able to accrue such incredible counting statistics topped only by Favre because like Favre, he is an Iron Man. From the time he entered the league in 1998 until 2011, Manning played in 100% of the Colts’ 227 possible games, which is topped only by Favre’s 321 consecutive games. 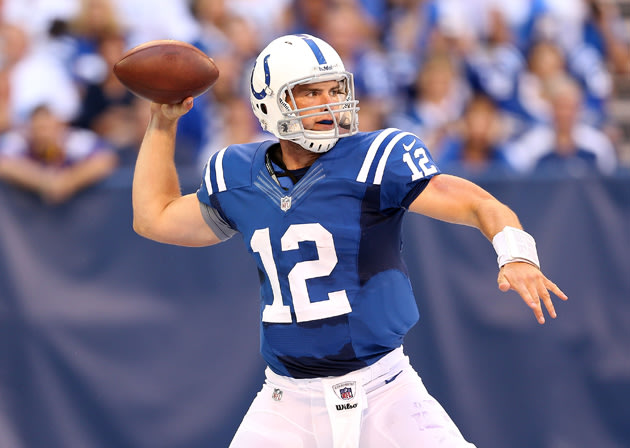 Andrew Luck has a very long way to go before he catches up to Manning’s career passing yards and touchdowns totals, but he’s off to a good start. In his rookie year, Luck threw for 4,374 yards, which broke the record for passing yards by a rookie, and 23 touchdowns (3 off Manning’s rookie total).

But a major factor which should significantly help Luck catch up is the NFL’s shift into a very pass-oriented league as compared to Manning’s time in the late 90’s to 2000’s. To further illustrate this point, we need only look at the list of best single-season passing yards.

[sc:MLB240banner ]Before 2008, Dan Marino had the only 5,000 yard passing season in NFL history; since 2008, there are now six. Furthermore, a staggering 13 out of the 20 best single-season passing totals have come in the past five years alone.

Luck has also shown in his first year that he too may possess the Manning gene when it comes to crunch time. Of the 11 wins in his rookie season, Luck orchestrated a game-winning drive to win seven of them. For a more updated version, Luck has now had nine game-winning fourth-quarter drives in the first 22 games of his career.

But the place where Luck can definitively stand head and shoulders above Manning is in the playoffs. Although Peyton still has similarly great stats in the playoffs (20 career games, 63.2% completion, 284 yards/game, 32 TDs, 21 INTs), his record is a middling 9-11. And as Irsay remarked earlier in the week: for all his years of brilliance, Peyton only has the one ring to show for it.

Fairly or unfairly, Manning has been defined by his lack of Lombardi Trophies as compared to other greats like Montana, Elway, Young, Bradshaw and Brady. If Andrew Luck wants to truly set himself apart, above and beyond Peyton Manning, then he must go out and win some rings.