The Boston Bruins lost their first three games at home; a surprise considering they owned the NHL’s best home ice advantage for the past three seasons. But the Bruins made sure to recover from their slow start with back-to-back road wins against Arizona and Colorado. They’ll welcome the struggling Philadelphia Flyers, who will be on the second leg of a back-to-back, at TD Garden tonight.

Can the Bruins finally get a big win at home this season? Read on as we take a look at one of tonight’s explosive hockey games. Don’t get left out in a busy night in the NHL. Check out our complete previews for the Maple Leafs vs. Sabres and Red Wings vs. Oilers.

The Philadelphia Flyers are struggling to bury pucks in nets this season. They’ve scored just one goal in three of their last four games, going 2-2. They’ve been outscored 9-5 in those games, including a 7-1 thrashing in a road outing in Florida.

[sc:NHL240 ]Wayne Simmonds, who led the team with 28 goals last season, is still looking for his first in his current campaign. Scoring leader Jakub Voracek, who ranked fourth in the league with 81 points last season, is still scoreless through the first five games as well. But Voracek could finally get his first points of the season against Boston. In 16 career matchups, he has tallied four goals and seven assists against the Bruins.

Voracek could also be able to help his teammates with his playmaking. Matt Read and Brayden Schenn, the only two Flyers with more than one goal (two apiece), could provide Voracek an outlet for his passes.

If the Flyers’ offense struggles once again, then they’ll need solid goaltending to keep them in the game. Starter Steve Mason was solid in a 2-1 loss to the Dallas Stars last night, turning away 30 of 32 shots against him. But Michal Neuvirth has made a case as a pretty good backup with back-to-back shutouts in his first two starts this season, including a 3-0 victory against defending Stanley Cup champion Chicago on October 14. 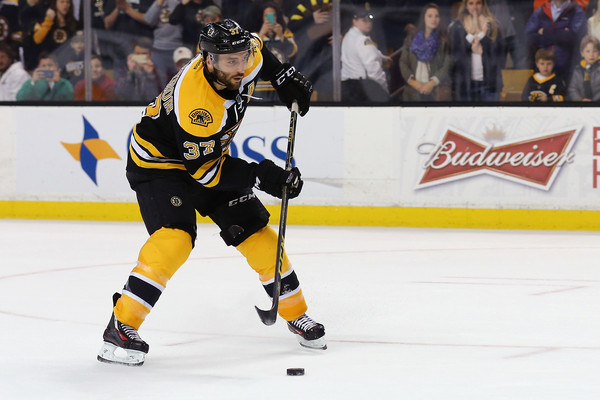 The Boston Bruins went a league-best 71-22-13 on home ice over the past three seasons, but have dropped their first three games at the TD Garden in this current campaign. They seem to have righted the ship, though, with back-to-back victories over Colorado and Arizona, outscoring their opponents 11-5.

Patrice Bergeron was masterful on power play in a 5-3 win over Arizona on Saturday, scoring twice with the man advantage in the final period. David Krejci also had a power play goal in the second period. Being able to convert in the power play situations should be highly advantageous against the Flyers’ 19th-ranked penalty kill percentage (82.6).

While the Bruins could score a handful of goals against Philadelphia, they could also continue the Flyers’ offensive woes. Goalie Tuukka Rask may be 1-3 with a 4.29 GAA and .851 save percentage this season, but he’s 8-1 with a 1.43 GAA in nine career starts against the Flyers.

The Bruins have won 15 of their last 19 against Philadelphia, including five straight at TD Garden.

The Bruins (-150) continue rolling with their third-straight victory. Create a betting account now and get the best odds and lines for NHL action.