The Detroit Red Wings roared to a fast start with three-straight victories this season, including a dominant showing against the last Stanley Cup final runners-up the Tampa Bay Lightning. But they’ve lost their past two and have a tough outing on the road against the new and improved Edmonton Oilers up next.

Drafting promising youngster Connor McDavid first overall in the NHL entry draft has reaped benefits for the Oilers, who have won back-to-back outings heading into this contest. Can McDavid live up to the hype once again, this time against a veteran-filled team?

Get plenty more NHL action with our complete previews for the Maple Leafs vs. Sabres and Flyers vs. Bruins.

Detroit’s four-game Canadian tour was off to a bad start, losing 4-1 to the surging Montreal Canadiens on Saturday. However, the Red Wings take on a pretty manageable matchup in the Edmonton Oilers. Detroit has won eight straight games against the Oilers.

[sc:NHL240 ]The Red Wings’ top line has been pretty amazing. Henrik Zetterberg, Justin Abdelkader and Dylan Larkin have combined to score eight goals. But the rest of the team has yet to follow suit, tallying just seven goals to date.

Zetterberg has been the lifeblood of the Red Wings’ offense with team-highs of nine points and seven assists this season. He’s been dominant against Edmonton in his career, tallying 39 points (nine goals and 30 assists) for a plus/minus of 17 in 41 career matchups. He’ll be the perfect setup man for Abdelkader, who leads the Red Wings with four goals.

For Zetterberg and the top line to thrive, they’ll need Detroit’s defense to put on a solid performance. After allowing just four goals in the first three games, the Red Wings allowed nine in their last two. Promising young goalie Petr Mrazek has allowed three goals in each of his two games this season, but has posted a solid .931 save percentage nonetheless.

Mrazek tied a career-high 44 saves in his first start this season on the road against Carolina. He had also recorded a shutout in his lone career start against Edmonton, stopping 14 shots in a 5-0 victory in November 2013.

The Red Wings have won their last three games in Edmonton.

Betting on the Edmonton Oilers 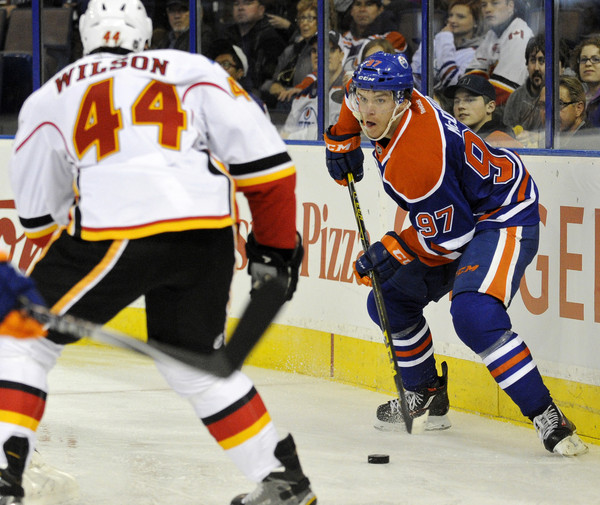 The Edmonton Oilers rebounded nicely with back-to-back wins after losing their first four games of the season. Their offense is seemingly falling into place with Nail Yakupov scoring two goals in as many games, while top overall pick Connor McDavid has team-highs of three goals and five points after failing to tally a point in each of the first two games of his pro career.

Having McDavid drawing the Red Wings’ attention may open up Edmonton’s handful of scoring options. Taylor Hall, Yakupov, Lauri Korpikoski and Ryan Nugent-Hopkins have all scored two goals this season. Having more than one scoring option should help defenseman Andrej Sekera create some plays as well. Sekera leads the Oilers with three assists this season.

While he may draw attention to himself, McDavid should be solid in Edmonton’s second line against Detroit. He should be able to outplay a shallow Red Wings team that has struggled to score aside from its top line. McDavid will have the necessary support from Benoit Pouliot and Yakupov, though. Pouliot has just two points this season, but had the second-most goals (19) in the team last season.

New Oilers goalie Cam Talbot (1-3, 2.54 GAA) hasn’t been solid to start off the season with his new team, but he’s been serviceable in three career matchups against the Red Wings. He went 1-1-1 with a 2.27 GAA and a .929 save percentage against Detroit while with the Rangers.

Edmonton has lost three of its last four games at home.