The New York Islanders and the Pittsburgh Penguins have some of the best scoring rosters in the league. That means you can definitely expect fireworks in Brooklyn when these two Metropolitan Division teams collide later tonight. Add to that the positional battle for the playoffs with the Pens looking to catch New York for third place in the division.

Read on for a breakdown of this matchup. You can also check our NCAA basketball conference championship previews for the Big East, ACC, and Big 12.

Pittsburgh is looking for consistency. The Penguins haven’t won in consecutive fashion in four games thus far this month. That’s something that’ll add to their motivation to win on road later tonight against the Islanders, whom they beat in an earlier meeting this season.

The Penguins are coming off a 6-1 annihilation of New Jersey on Sunday with Evgeni Malkin and Sidney Crosby teaming up to lead the team. Malkin scored twice against the Devils, including a power play goal.

Crosby didn’t light the lamp but dished out two assists to extend his point-streak to five games. He’s scored three goals and made three more during that stretch. Crosby must be poised to keep his streak going later tonight considering the way he dominated New York’s defense when the Pens defeated the Isles on January 2, 5-2.

Crosby struck twice—both power play goals—in that game, while Malkin recorded three assists. The Islanders’ penalty kill (86.4) is second in the NHL, but has looked dicey of late, having allowed a power play goal in each of their last three games.

Marc-Andre Fleury is expected to be back in front of the net after ceding his starting gig to backup Matthew Murray in the New Jersey game. Fleury, who sports a 27-15-6 record to go with a 2.35 GAA and .921 SV% this season, was nothing short of sensational in the earlier matchup with the Islanders, stopping 38 of 40 shots faced.

Pittsburgh is 3-1 in its Fleury’s last four starts. 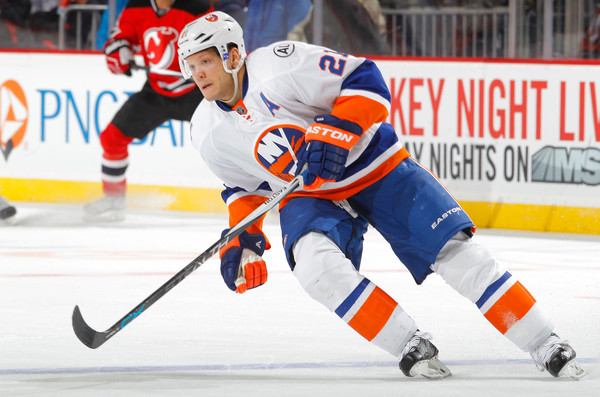 Unlike their fellow Barclays Center tenants, the Brooklyn Nets, the Islanders just keep on rolling. The Isles recorded their third straight win and sixth in seven games on Sunday by downing the Rangers on the road, 6-4.  The Islanders now make a brief stop later tonight at home, where they are 4-1 in their last five games, before trekking to Vancouver this Tuesday.

The Isles’ offense is working wonders right now. That doesn’t come as much surprise, though, as the team has so much firepower on its roster. Kyle Okposo, who had a goal and an assist against the Rangers, paces the team in points (52) and assists (35). John Tavares, meanwhile, takes care most of the goal-scoring duties with a team-leading 23 scores.

New York has scored 20 goals over its last three games, but for all their offensive prowess, the Isles still need their defense to tighten up against Pittsburgh. They let the Pens outshoot them, 43-40, thus putting lots of pressure on backup goalie Thomas Greiss, who let in four goals in the first meeting.

Greiss, however, is likely not going to be head coach Jack Capuano’s goalie of choice later tonight. Instead, all signs point to Jaroslav Halak making a start. Halak stopped just 22 of 26 shots by the Rangers the other night, but has four wins in his last five starts.

The Islanders are 3-0 in Halak’s last three starts against Pittsburgh.