The Pittsburgh Penguins avoided falling down a 0-2 series hole thanks to a wild overtime win in Game 2. With the series all tied up, the Penguins now eye to take the driver seat for the first time this series when they pay the Tampa Bay Lightning for Game 3. Read on for more about this matchup. You can also check out our breakdown of Game 2 between the Oklahoma City Thunder and Golden State Warriors.

Pittsburgh made sure lightning would not strike twice at home, as the Pens defeated Tampa Bay Monday in overtime, 3-2.

Sidney Crosby scored the game-winner a mere 40 seconds into the overtime. That was also Sid the Kid’s first goal since the first round so this performance could be a sign of better things to come from the team captain. That said, Crosby doesn’t really need to find the back of the net to make his presence felt. He’s been terrific in setting up his teammates for scoring chances, as evidenced by his eight assists this postseason.

The Pens’ third line also continued its excellent play with Phil Kessel burying a power play goal off the assists of Nick Bonino and Carl Hagelin in the first period. Pittsburgh’s depth has troubled opponents in the playoffs while easing some burden off Crosby and Evgeny Malkin.

Matt Murray allowed two quick goals in the first period of Game 2, but regained his footing back just in time to stave off the Lightning. Murray made 19 saves on 21 shots faced on Monday. 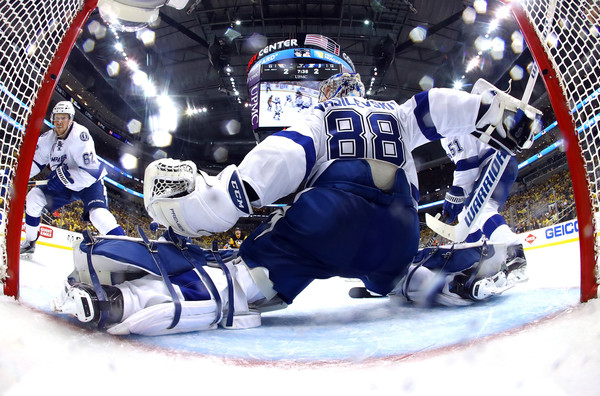 Andrei Vasilevskiy’s going to need a lot of help. That’s the least one could say about the backup goaltender, who was sensational in Game 2’s loss, turning away 38 of Pittsburgh’s 41 shots.

There’s no word yet on Ben Bishop’s return but based on Vasilevskiy’s performance the last two games, it appears Tampa Bay’s netminding remains in good hands.

The Lightning, however, need their blue line to show some teeth. Tampa Bay was severely beaten in the possession battle with the Lightning getting off just 21 shots. Through the first two games of the series, the Penguins have 76 shots as against Tampa’s 41.

The return of Anton Stralman in Game 2 was a nice boost for the Lightning’s blue line and he announced his entry with a goal in the first period. A home game

Jonathan Drouin, meanwhile, scored the other goal for Tampa. Drouin has been some kind of a revelation for the Bolts in the playoffs, as he already has compiled two goals and eight assists since the postseason began.

The Lightning are 3-0 in their last three home games against Pittsburgh.