The 2016 NASCAR Sprint Cup Series moves on to Kentucky Speedway for the Quaker State 400. Brad Keselowski won last week in Daytona, and will be looking to make it two in a row at a track where he has had very good success. However, he won’t be the overall favorite in what is shaping up to be a very closely-contested race.

Let’s check out three of the top favorites to watch out for, as well as a sleeper and long shot who could be able to contend for the checkered flag. Meanwhile, check out some expert picks for this race here.

After a rough four-race stretch, Kyle Busch finally looks to have turned the corner. He finished seventh in Sonoma, and was second last week in Daytona. Busch looks primed to end his six-race winless drought in Kentucky, where he’s had a lot of success over the years. He owns two wins on the track (in 2011 and last year), and has finished in the top 5 two other times in five career starts.

Harvick is the co-favorite here in Kentucky, but the No. 1 driver in the Sprint Cup standings is hardly a shoo-in to drive up to Victory Lane. He has yet to win – or even lead a single lap – on this track.

Still, expect the very consistent Harvick to bounce back from his disappointing race in Daytona, where he was involved in a huge crash that took out other big names. And it’s not as if Harvick has been completely devoid of success in Kentucky. He’s finished in the top 10 in each of the past three years. 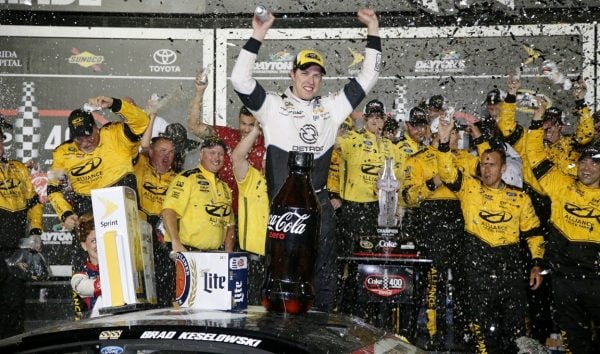 Brad Keselowski’s body of work in Kentucky has been every bit as dominant as Kyle Busch’s. Keselowski has won a total of five races at Kentucky Speedway – two in the Sprint Cup (2012 and 2014), and three in the Xfinity Series. He’s also fared well in similar intermediate tracks like the All-Star Race in Charlotte (he finished second) and Michigan (fourth).

Keselowski’s been on fire in his last five races, with four top-5 finishes, including a win last week in Daytona. That, coupled with his excellent track record in Kentucky, makes him very good value at +750 to grab another win.

Kenseth should really be right up there with the top favorites in terms of odds. Sure, his average finish in the last three races is only 20, but Kenseth’s results in Kentucky throughout his career can’t be overlooked. Only Busch has a better average finish than Kenseth in the five Sprint Cup races at the track, and not even Busch can boast Kenseth’s achievement of finishing no worse than seventh in all five races.

The best long shot to win in Kentucky is likely Kasey Kahne. The 36-year-old hasn’t had the best of seasons, with just two top-5 finishes in 17 races. However, he is the only driver in his odds range who has actually won a race at an intermediate track like Kentucky Speedway in the last two years. Kahne has nine career intermediate track wins, and has finished in the top-5 nearly a quarter of the time.

Keselowski (+750) claims yet another win in Kentucky.