Andy Murray secured a place in the third round of the Rio Olympics with a resounding 6-3, 6-1 win over Juan Monaco on Tuesday. The world no. 2 wasted little time in advancing his quest for a second consecutive gold medal, using only one hour and nine minutes to eliminate the Argentine.

Awaiting Murray in the round-of-16 is Fabio Fognini, who saw off 16th seed Benoit Paire, 4-6, 6-4, 7-6 (5) in the second round. The head-to-head series between the two players is currently deadlocked at 2-2, with Murray the victor in their last meeting at Valencia back in 2014. This will be their first matchup, though, in an Olympic setting.

For Murray to pull off the victory later today, he will to continue his excellent service play. He won 78 percent of his second serve points and 70 percent of his first serve points against Monaco. He also broke the Argentine’s serve five times and benefited from Monaco’s 26 unforced errors.

Rafael Nadal booked a spot in the third round of the 2016 Olympics with a gritty 6-3, 6-3 victory over Andreas Seppi on Tuesday. It was a battling performance from Nadal who overcame 42 unforced errors. Nadal, who improved to 6-1 against Seppi, has lost just nine games in his opening two matches. Not bad for a 30-year-old who’s battled various injuries the past two years.

Next up for the Spaniard is a round-of-16 clash with Gilles Simon. The 2008 Olympic champion has won seven of their eight head-to-head matchups, though they haven’t played since the Indian Wells Masters back in March last year. Nadal trounced Simon in straight sets in that round-of-16 contest, 6-2, 6-4. Simon is coming off a convincing 7-6 (3), 6-2 win over Yuichi Sugita in the second round on Tuesday. He won 62 percent of his second serve points in that match. 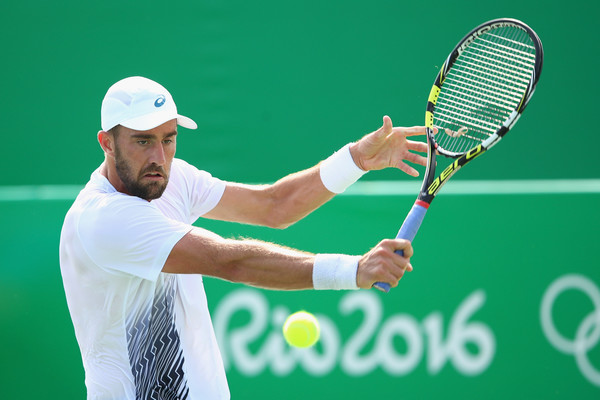 Evgeny Donskoy barged into the third round of the Rio Olympics with a thrilling 3-6, 7-6(1), 7-5 victory over David Ferrer on Tuesday. It was a stunning performance from the Russian who needed two hours and 28 minutes to record the upset win. Next up for Donskoy is a round-of-16 showdown with Steve Johnson. The American is through to the third round after beating Portugal’s Gastao Elias, 6-3, 6-4. The lone remaining U.S. man in the Olympic singles draw has yet to drop a set in this tournament.

The dream lives on for Brazil’s Thomaz Belucci. The hometown favorite recorded a major shock on Tuesday, upsetting 11th seed Pablo Cuevas of Uruguay 6-2, 4-6, 6-3. He will need to be at his best, though, in the round-of-16 as standing in his way is the ever-dangerous David Goffin. The Belgian continued his best Olympics run with a convincing 6-3, 6-3 victory over Israel’s Dudi Sela in the second round.

Roberto Bautista Agut barged into the third round of the Rio Olympics with a straightforward 7-6(2), 6-2 victory over Paolo Lorenzi on Tuesday. It was an excellent performance from the Spaniard who needed just 89 minutes to deny the Italian. Next up for Bautista Agut is a round-of-16 showdown with Gilles Muller.

The Luxembourg star recorded one of the upsets of the tournament thus far, beating fifth-seed Jo-Wilfried Tsonga in straight sets, 6-4, 6-3. It’s the latest big victory for Muller, who has reached two of his five career ATP World Tour finals this season. Key to his win against Tsonga was his stunning serve. He blasted 14 aces against the highly-fancied Frenchman. 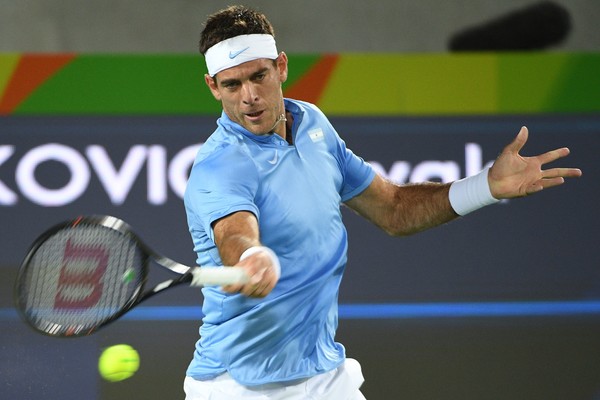 Juan Martin Del Potro stormed into the third round of the Rio Olympics with a 6-3, 1-6, 6-3 win against Portugal’s Joao Sousa on Tuesday. It was an excellent showing from the Argentine, who backed up the biggest upset of these Summer Games with another strong performance. The 27-year-old dominated proceedings in the third set, blasting 13 aces and losing only two points on his serve (20/22).

He will look to keep the momentum going when he locks horns with Taro Daniel in the round of 16. The Japanese star breezed past Great Britain’s Kyle Edmund in the second round, 6-4, 7-5. This will be their first-ever meeting in the ATP Tour.

Marin Cilic secured a place in the third round of the Rio Olympics with a resounding 6-3, 6-4 win over Radu Albot on Tuesday. Cilic broke the Moldovan’s serve four times to forge a round-of-16 showdown with Gael Monfils.

The Frenchman silenced the home crowd with a convincing 6-2, 6-4 victory over Brazilian Rogerio Dutra Silva. Monfils has been in excellent form of late, winning his first ATP World Tour 500 title at the Citi Open in Washington and nabbing a runner-up finish at the Rogers Cup in Toronto. Monfils leads his head-to-head matchup with Cilic, 1-0.

Kei Nishikori survived a major scare on Monday, beating Aussie John Millman in straight sets to advance to the third round of the Rio Olympics. The fourth seed was down a break in both sets but the Japanese star came back to pull off the thrilling 7-6, 6-4 victory. He will next face Slovakia’s Andrej Martin, who received a second-round bye when German Philipp Kohlschreiber withdrew because of a right foot injury. This will be their first meeting in the ATP Tour.

Create a betting account now and put your Olympic predictions to the test!