The San Diego Chargers are making a strong case to rival the Denver Broncos in AFC West with their fourth-straight victory on Sunday. They travel to Oakland next to go against a Raiders team fresh off their bye week.

Will the Chargers continue their dominant run? Read on as we give you everything you’ll need to know about the Chargers vs. Raiders game. In the meantime, check out our preview for the Broncos vs. Jets game happening earlier that day, as well as our preview for Monday Night Football between the 49ers and the Rams.

The San Diego Chargers will head to O.co Coliseum on the heels of their 31-0 demolition of the New York Jets on Sunday. The win brought the Chargers their fourth-straight win, and an undefeated 5-0 ATS record.

[sc:NFL240banner ]Despite their impressive run, the Chargers continue to be ravaged by injuries. San Diego lost their third center in Doug Legursky to a season-ending left knee injury on Sunday. Meanwhile, Nick Hardwick is on injured reserve due to a neck injury and Rich Ohrnberger missed the past two games with a back issue.

The Chargers are left with rookie center Chris Watt. Nevertheless, coach Mike McCoy had praised the rookie for solid play at the position as well as a guard over the weekend. Watt played 38 snaps against the Jets.

Aside from center, the Chargers’ running back depth is also thinning. Donald Brown went out with a concussion on Sunday, Ryan Matthews is out indefinitely with a sprained right knee and Danny Woodhead is out for the year with a broken left leg. The No. 1 RB spot now belongs to rookie Branden Oliver.

Oliver took only a total of 12 handoffs in his two appearances against Buffalo and Jacksonville, but ran for 114 yards on 19 carries and a score against the Jets. He also received a touchdown pass from quarterback Philip Rivers. Oliver should be up for another big game against the Raiders, who allow 158.3 rushing yards per game (31st in the NFL).

Rivers deserves praise for a stellar, potentially MVP-calibre season so far. He went 20 for 28 for 288 yards and three touchdowns and one interception on Sunday. His passer rating of 125 against the Jets marked his fourth straight game with a passer rating of 120 or higher (a career-best). One of Rivers’ key weapons is tight end Antonio Gates. Rivers and Gates have now connected on 65 touchdowns in their careers, the most in NFL history between a quarterback and a tight end.

Together, Rivers and Gates should be able to test Oakland’s pass defense which has not faced an elite quarterback, with the exception of an out-of-sync Tom Brady, this season. The Raiders have allowed 207 yards per game in four outings this season.

The total has gone under in three of the Chargers’ four games as favorites.

Create a betting account now and get yourself in on all the football action. 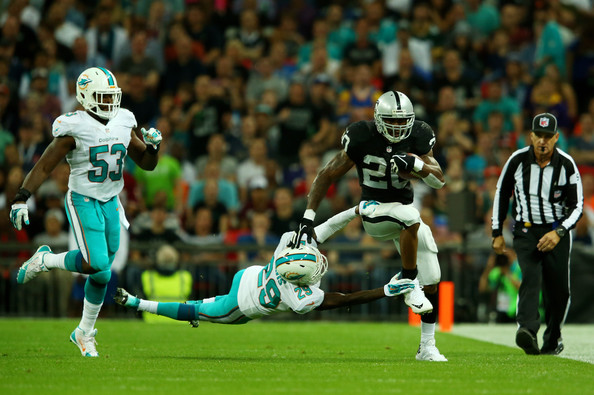 Four games into the season, the Oakland Raiders are still in search of their first win. The Raiders have lost an NFL-high 10 straight games dating back to last season. Looking for a change, they sacked head coach Dennis Allen and installed offensive line coach Tony Sparano at the helm.

Sparano is a run-oriented coach. He’ll have the Raiders running plays designed for the rush. However, the Raiders have struggled on the ground this season averaging 61.5 yards per game. They’ll need more production from their running backs Darren McFadden and Maurice Jones-Drew if they wish to exploit a perceived weakness in the Chargers.

An offseason acquisition, Jones-Drew has battled an injured hand and has been ineffective in his limited playing time with 12 yards on 11 carries. Meanwhile, McFadden has fared better, but is averaging 3.4 yards on 45 attempts.

Establishing the run will also open up rookie quarterback Derek Carr’s passing game. Carr has averaged 184 yards per game, and has thrown four touchdown passes and four interceptions this season. The rookie has targeted wide receiver James Jones (leading the team with 21 receptions for 272 yards and two touchdowns) the most.

Still, San Diego will have cornerback Brandon Flowers hounding Jones for much of the game. Flowers is tied for fifth in the NFL with two interceptions and has broken up seven passes. The Raiders may find themselves in trouble should Carr continue throwing in Jones’ way.

The San Diego Chargers (-7) win and cover with ease at the expense of the Oakland Raiders.