The San Diego State Aztecs went on quite a romp, going on a nine-game win streak to end the season as Mountain West champions. The Aztecs now have a chance to end the year on a higher note, playing in the Hawaii Bowl against the Cincinnati Bearcats. Cincinnati has struggled lately, going 2-2 in their last four games. But they’ll be very motivated to get their first bowl victory under head coach Tommy Tuberville’s guidance.

Get more action on Christmas Eve with our complete preview for the Bahamas Bowl’s Middle Tennessee vs. Western Michigan.

There’s no secret what the San Diego State Aztecs want to do in the Hawaii Bowl. They want to run the ball with authority to score touchdowns. Then, they’ll use their rock solid defense to get their opponents’ offense off the field quickly so they can run some more.

The Aztecs will be very confident heading into this game. They’ve developed a lot under the guidance of head coach Rocky Long. San Diego State finished the regular season with their first 10-win campaign under Long, including clinching the Mountain West title.

[sc:NCAA240banner ]San Diego State’s offense will run through running back Donnel Pumphrey. He leads the team with 1,554 yards and 16 scores. Pumphrey will have some backup from Chase Price, who has rushed for 940 yards and six touchdowns. Both running backs should have their fair share of big gains against a Cincinnati defense, which has struggled to stop the run. The Bearcats have allowed 190.8 yards per game this season.

The Aztecs love to run the ball and all. But quarterback Maxwell Smith has come up with some big plays as well. Smith has completed just 55 percent of his passes, but has thrown 13 touchdowns compared to just two interceptions. He’s averaging a pretty solid 7.65 yards per pass attempt despite his limited usage.

On the other side of the ball, San Diego State has also showed their dominance. They’re ranked fifth in rushing defense (111.2 yards per game) and 13th in passing defense (176.8 yards per game). The Aztecs have been excellent in picking off opposing quarterbacks ranking fifth in the nation with 20 interceptions.

Junior defensive back Damontae Kazee is one of the best in the nation at picking off opposing quarterbacks. He has seven interceptions (third-most in the FBS) this season, including a pick six.

The Aztecs are 8-1 ATS in their last nine games.

Betting on the Cincinnati Bearcats (7-5) 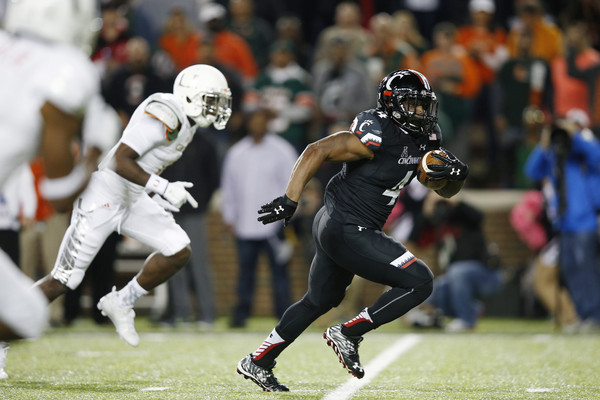 The Cincinnati Bearcats have a big problem entering this contest. They’ll be without quarterback Gunner Kiel, who is dealing with a personal issue. Kiel did not make the trip to Hawaii for this bowl game. Kiel has been the lifeblood of this team, completing 65.2 percent of his passes for 2,777 yards passing with 19 touchdowns and 11 interceptions..

Kiel’s replacement, Hayden Moore has struggled under center this year. He’s less accurate (58.5 percent completion rate) and has thrown almost as many touchdowns (nine) as interceptions (eight). He’ll have a very tough matchup ahead of him when he takes on San Diego State. The Aztecs rank 13th in the nation in passing defense (176.8 yards allowed per game).

If Moore struggles to air out the ball, then the Bearcats may need to lean on their trio of running backs Hosey Williams, Mike Boone and Tion Green. The trio has combined to run for 2,141 yards this season. Boone and Green are the premier scorers, each with a team-high eight rushing scores. But getting past San Diego State’s front seven may be difficult. The Aztecs also excel in stopping the run, allowing just 111.2 yards per game.

If the offense struggles to gain significant yardage against San Diego State, Cincinnati’s defense will need to step up big-time. The front seven has struggled against the run this season, allowing a whopping five yards per carry. The challenge of holding the front seven will fall on senior defensive lineman Silverberry Mouhon. He leads the team with seven tackles for loss this season, but may not get much help if he gets contained.

The Bearcats are 4-2 ATS in their last six games.

The Aztecs (-1.5) storm to a huge victory. Create a betting account now and get the most out of this year’s bowl season.