The Pittsburgh Steelers bounced back from their listless Thursday night defeat against the Ravens with a thoroughly impressive 37-19 victory over the previously unbeaten Panthers at Carolina. The Steelers now aim for their first winning streak of the season when they take on a Buccaneers team reeling from their own Thursday night drubbing against Atlanta.

For more AFC North-NFC South matchups, check out our preview of the Panthers vs. Ravens, and read on to see if the Bucs have a shot at breaking their duck.

Betting on the Tampa Bay Bucccaneers

What positives can the 0-3 Buccaneers take from their dreadful start to the Lovie Smith regime? Not much, to be perfectly honest.

[sc:NFL240banner ]Not only have the Bucs lost at home to backup quarterbacks against Carolina and St. Louis, but when faced with a legitimate starting quarterback for the first time against Matt Ryan and the Falcons, Matty Ice torched them for 56 unanswered points in three agonizing quarters.

Cynically, the best thing that may have happened in that game was quarterback Josh McCown injuring his throwing hand, thus ruling him out against the Steelers. McCown just hasn’t looked like an NFL-caliber starting QB in his two-and-a-half games of work, with a passer rating of 65.8 and twice as many interceptions as touchdowns.

In steps Mike Glennon, who coincidentally also made his first start in Week 4 last season after taking over for the disastrous Josh Freeman. Although he went just 4-9 as a starter, Glennon had his moments. He completed almost 60 percent of his passes with a nearly 2:1 TD-to-INT ratio for the season, and almost led the Bucs to a shock upset of the eventual Super Bowl champion Seahawks at Seattle.

Glennon’s insertion could just be what the Buccaneers need to re-establish their non-existent passing game. Vincent Jackson and Mike Evans are still two talented wide receivers capable of causing the Pittsburgh secondary missing veteran cornerback Ike Taylor, who is out with a broken forearm, some problems.

The Bucs also hope to have defensive anchor Gerald McCoy back at the heart of their lineup after missing the Falcons game with a hand injury. If Tampa Bay can do anything even remotely well, it’s stopping the run, which will be crucial against a suddenly surging Steelers rushing attack.

The Bucs have lost eight of their last nine road games and have failed to cover the spread in seven of those games. 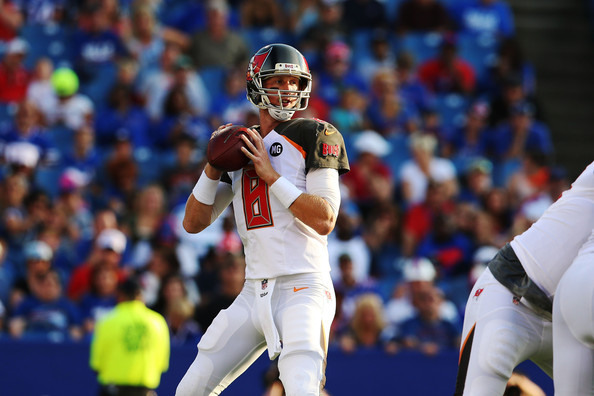 The Steelers’ quarterback-running back-receiver trio of Ben Roethlisberger, Le’Veon Bell and Antonio Brown is as talented as any in the league, and all three were at their best on Sunday night in their impressive 37-19 Sunday night win against the Panthers.

Bell bulldozed past one of the best defences in the league for 147 yards on just 21 carries, as he and LeGarrette Blount combined for 264 rushing yards. With the running game purring so smoothly, Roethlisberger was at his most efficient best as he completed 73 percent of his passes for 196 yards and two touchdowns, both going to Brown, who had 10 catches for 90 yards.

That was just about the most ideal situation for the Steelers on offense, with the two-headed running back monster gobbling up yards while Big Ben manages the game and waits to pounce with Brown for a big play. The Steelers have the opportunity to recreate this best-case scenario against a Bucs defense that was ravaged for 144 rushing yards by the Falcons backs and burned time and again by Julio Jones over the top.

The Steelers defense admittedly faced a Panthers team lacking offensive weapons aside from Cam Newton, but it was no less impressive how they suffocated Carolina into just 269 total yards – including just 42 rushing yards – of offense prior to a garbage-time touchdown drive.

Pittsburgh will be in an almost identical situation against the Buccaneers, who may have possibly have even fewer threats on offense. And the Steelers get to play back in Pittsburgh, where they’ve won six of their last seven home games.

The misery continues for Lovie Smith and Tampa Bay as the Steelers (-7.5) sink the Bucs by double-digits in Pittsburgh. Create a betting account now and cash in on all the exciting NFL action.