A crucial matchup is set to commence this Monday night in the NHL, as the Tampa Bay Lightning and New York Islanders collide for the third and final time in the regular season.

The Lighting head into this match looking to continue their pursuit of clinching a playoff spot in the Eastern Conference. They just need to get one more win along with a loss by Detroit to finally succeed in doing so. But of course, that’ll be easier said than done against the Islanders, who’ll also pushing for the same goal.

[Get to know more about this matchup with our breakdown below. And if you’re craving for some baseball action as well, check out our previews of the Seattle Mariners vs. Texas Rangers and Washington Nationals vs. Atlanta Braves.

Following a shutout loss to Montreal on Thursday night, the Tampa Bay Lightning responded back with a bounce-back victory at the expense of the New Jersey Devils, 3-1, over the weekend.

[sc:NHL250 ]In that contest, the Bolts used a strong third period, wherein they scored two goals and outshot New Jersey, 17-5, to ultimately seal the victory. And more importantly, this win allowed the Tampa Bay to remain only two points behind the Atlantic Division-leading Florida Panthers.

Now, the Bolts will be closing out the regular season with four road games and the first one being tonight’s bout versus the New York Islanders. That said, the Bolts, who recently found out that captain Steven Stamkos will miss the next one to three months due to a blood clot in his right arm, shall look to Brian Boyle and Victor Hedman to take the reins in leading them to a much-needed win.

Boyle picked up a crucial power-play goal and provided four total shots in the win over New Jersey. Overall this season, he has accumulated 18 points (12 goals, six helpers) thus far. Hedman, on the other hand, scored a goal with an assist in a team-high 25:29 minutes of action during the same game.

As for the defense, Ben Bishop is expected to continue manning the net for the Lightning. He turned aside 25-of-26 shots against New Jersey. Bishop also marches into this game against the Isles owning a 15-9-1 record along with a 1.92 GAA and .935 SV% this season.

The Lightning will also be playing without their top defenseman in Anton Stralman, who is out indefinitely with a broken left fibula. 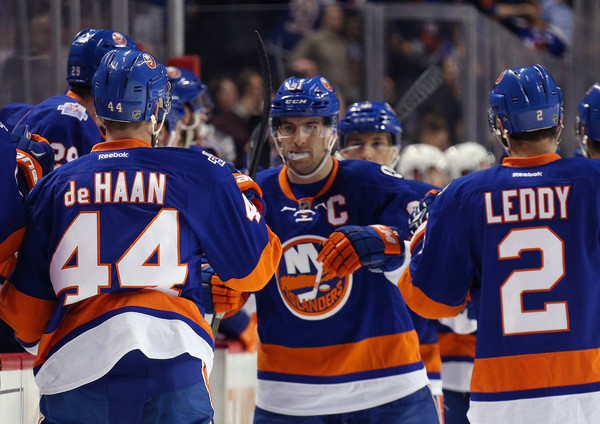 New York saw its three-game winning streak come to a close after suffering a shutout loss to the Penguins last Saturday night. The Isles were outshot by Pittsburgh, 33-24, and received a forgettable outing from goalie Jean-Francois Berube, who gave up five goals on 33 shots in that game.

Well, what’s done is done and New York will hope to relocate its offense and receive a better performance out of the more-reliable Thomas Greiss, who is 21-11-4 with a 2.37 GAA and .924 SV% this season, in for tonight’s bout with the visiting Tampa Bay Lightning. A win for the Isles will help them inch closer into sealing a second-straight trip to the Stanley Cup playoffs.

Expect none other than the pair of John Tavares and Kyle Okposo to lead the attack from start to finish. The two are the team’s top threats this season with 61 and 58 points, respectively.

Tavares, in particular, leads the team in goals with 29 and should be able to provide some serious trouble to the Tampa Bay defense (2.36 goals allowed per game). Across 22 career games against the Bolts, he’s garnered a total of 22 points (eight goals, 14 helpers).

Create a betting account now and cash in on all the exciting NHL regular-season action.